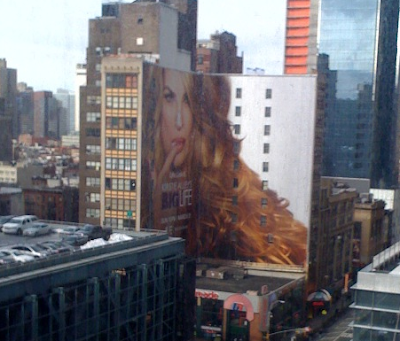 Our latest billboard neighbor at the New York Times is a big ad of Kirstie Alley's Big Life, a new reality series based on the actress' life and her ever changing waistline. It premieres on A&E on March 21st.

The NYTimes.com site has a cutting review of Alley's new stint on television, claiming that her struggle with weight and her somewhat isolated lifestyle of staying at home and raising lemurs is rather sad. Personally, I long for her 2005 Showtime series Fat Actress. It was an amusing semi-autobiographical comedy. What made it funny were her co-stars: the amazing Rachael Harris as Kevin her hairstylist, and the funny Bryan Callen as Eddie, her personal assistant. Alley herself was, at times, somewhat chuckle-worthy to over- the-top annoying; however, the duo of Callen and Harris made the laughs. They could have splintered off into a series of their own as they bumbled by as Kirstie's lapdogs, trying to placate her woes and join her in various Hollywood bullshit diet fads like eating Kleenex and injesting tape worms. Memorable moments include the episode John Travolta called the police to her house because he thought she was being murdered. Another time she tried to seduce Jeff Zucker into giving her a holding deal so she could pay her bills. I've unsuccessfully tried to find a screenshot of Zucker shamefully running out of Kirstie's house in her bathrobe with bubble bath suds on his head. He must have had all those images burned.

It comes down to this: Big Life, much like Fat Actress, allows Alley to once again utilize her weight problem as a way to stay employed. That, in itself, is rather sad. But in skinny Hollywood, it's survival.
Posted by TVBlogster at 11:42 AM