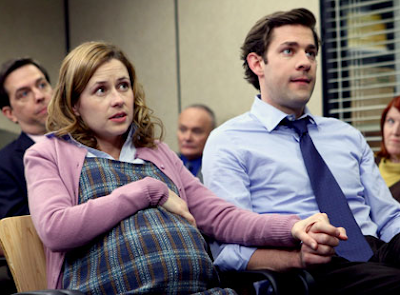 My previous post on Tuesday was a bit contradicting. On one hand I lamented how the lack of good new comedy shows thrust me into a malaise; however, the fact is - there are current comedies on air and in production that definitely float my boat such as Funny or Die Presents, Players, The Life and Times of Tim, and Children's Hospital. Perhaps the whine was due to two weeks of endless boring Olympics, no more Conan and the indifference I've held over my own beloved The Office - the show that really got me started on this here blog.

After watching Dunder Mifflin get sold to Sabre, and Michael and Jim playing musical chairs with their management positions, tonight will bring us back to the land of adorable. Jim and Pam will finally give birth to six years of flirting, hurt feelings, does-she-or-doesn't-he angst, beach confessionals, brutal tears and buttery sweetness all gestated into a little baby Halpert. We'll be getting plenty of laughs in the process. Since their insurance won't cover more than two nights of medical expenses, Pam tries to hold in the baby until midnight while the rest of the office distracts her so she can check into the hospital for precisely 48 hours of sweaty pain, cursing Jim for ruining her body, and epidurals galore.

Funny. I didn't know that giving birth was like pooping - you could hold it until you find a bathroom. But in the Office microcosm you go with the flow. It's also fun to know Pam can go to work with contractions and eight pounds of baby crushing her junk just so the entire roster of office colleagues can spread their brand of crazy into the proceedings. Mild snarking aside, I am looking forward to this episode. I just wish they hadn't made it seem, via promos and episode synopsis, so zany.

The Office: The Delivery Parts I and II airs tonight on the network that shall not be named until Conan comes back on TV somewhere- at 9:00pm Eastern/8:00pm Central.
Posted by TVBlogster at 7:48 AM