If you happen to stumble across this blog from time to time, you'll notice that I'm rather the Upright Citizens Brigade follower these days. I've been a fan for years. Many an alumni can be found on the writing staff of Parks and Recreation, The Daily Show, SNL, Colbert, 30 Rock and the former Tonight Show with Conan O'Brien. Quite a few can be seen in front of the camera as well.

Despite some of the funny stuff that has been covered on this site, television has a sparse offering of interesting and alternative comedy fare lately. The Tonight Show with Conan O'Brien debacle dust has settled into a malaise. Thankfully Jimmy Fallon promises to continue fresh funny humor, but I haven't become addicted to him yet. My heart races with happiness at the thought that season two of Children's Hospital is currently in production for new installments on Adult Swim. Funny or Die Presents is happening on HBO. Sarah Silverman's Show on Comedy Central is broadcasting probably their best season yet. However, I'm a bit disillusioned by the various comedy sadness out there. After twelve years off the air, Seinfeld returned with... The Ref? No thanks. Jay Leno took the Tonight Show away from Conan and is back on at 11:35pm? A pox on NBC! More reality TV? Brain deadness. At least Conan joined Twitter, giving him internet presence to keep his name and humor alive, not to mention giving me a little joy in my life, while he works on his next step.

I've been looking at TV, and in some cases film, through the looking glass of the UCB Theatre. So bear with me as I write a bit obsessively about them. They have some cool stuff coming down the pike and infuse some fresh ideas into a tired entertainment landscape. 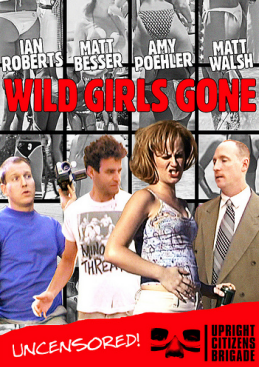 In addition to Spike TV's Players (see blog entry below) created and starring UCB the long awaited Wild Girls Gone, created by the UCB founding fathers and mother Besser, Walsh, Roberts and Poehler, will be available for download on iTunes on March 8th.

This ever elusive movie was made a few years back and never found footing for distribution. It's a spring break romp about a fictional town in Florida called White Sands that is host to a popular Ass Contest. Thanks to the town's politically ambitious Sheriff Terry Moran, played by Matt Walsh, it faces extinction. Amy Poehler plays a former Ass Contest winner and bored housewife to Moran who musters up her wild side by keeping the competition in ass town. Ian Roberts plays a video store employee who films the antics, and Matt Besser plays his stoner friend.

Lets face it. This isn't a tidy, cute comedy. The beauty of UCB's style is that they are not afraid to shatter some windows and bulldoze walls. It looks like a lot of stupid fun. So, buckle up.

Check out a preview on the Wild Girls Gone website.
Posted by TVBlogster at 7:07 AM