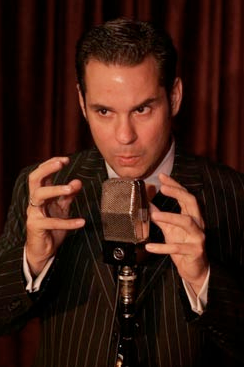 If you've ever gone to Largo at the Coronet Theatre or UCB in LA, or any club in the country, you're more than familiar with the fabulously dapper Paul F. Tompkins. He's an MC, a smart jokester an impressionist and a dashing, genuine comedic talent who can win you over with the most subtle story while sporting a bespoke suit and an old timesy twinkle in the eye.

Comedy Central has finally done something I can be happy about by giving PFT his own special Paul F. Tompkins: You Should Have Told Me. It airs on Friday, June 11th at 11pm, and it should be a joyous event.

In addition to seeing him on this Friday night telly, Tompkins will also be performing stand up earlier that evening at UCBLA. Check the theatre's schedule for tickets.

If you are in the New York area, Paul will be performing at The Bell House in Brooklyn on Sunday, June 13th.

Posted by TVBlogster at 6:56 PM