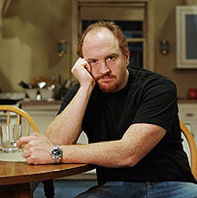 Louie CK's last stint in television sitcom land was in 2007 on HBO's Lucky Louie . It was a three camera, studio staged comedy that only saw one season and was quickly canceled, never to be seen again.

Everyone says that comedy is subjective. That might explain the fierce disagreements between two Lucky Louie camps: the viewers who loved the show, and those who didn't. I didn't. It wasn't the low budget set that resembled the Kramden's Brooklyn apartment on The Honeymooners. It wasn't because co-star Jim Norton bugged me. It was because it tried too hard to be different. It was as if the creators saw HBO as a candy store of anything goes and tried to fit all the penis and buttocks and sex and anger and hatred into 30 minutes of script. I can take vulgarity. But over doing it is an easy way out in my opinion.

Cut to today. Louie CK is back on FX with a new show, simply titled Louie. This one charmed me. Filmed in New York, it shows a surreal, funny and dark look at Louie's semi-autobiographical life as a newly divorced father of two. The first two episodes look promising. The very funny Chelsea Peretti appears in show one as a potential love interest, and a host of comedian friends team up in episode two for a poker game that turns into a well paced, dark and funny discussion about homosexuality. Louie is intriguing, and one of those twisted, interesting comedies that could define him on the TV map. Watch it on Tuesdays at 11pm.

Posted by TVBlogster at 7:14 PM