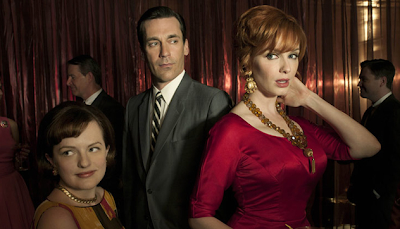 This blog would be remiss if it didn't mention the official announcement of Mad Men's renewal for season five. After AMC's budgetary issues, and show runner Matthew Weiner standing by his guns to maintain the integrity of the show, three more season of the insanely good drama have been locked in, hopefully insuring that Weiner's perennial visits to the negotiation table are over. This is indeed bittersweet. By "over", it's confirmed that these are the definitive last three seasons of Don Draper's and his peer's story. Three more seasons of evolving fashions, cultural movement and answers on what will happen to our protagonist as he, his family, his new wife and his minions enter a new decade.

The internet is weeping over how long viewers have to wait. Mad Men will not be returning until 2012. Now that contracts are set, Weiner and crew are just heading to the writers room (today) to break new stories.

Sundays this summer will be Don-less. But it will be worth the wait.

Here are links to articles to flesh out this week's backstage drama Mad Men negotiations: