Saturday was a blur of Improv teams continuing the Del Close love by yes-and-ing and creating beats at The Upright Citizens Brigade Theater, The Hudson Guild, and Urban Stages. Over at the new UCBEast, among a massive line up of more teams, Matt Besser brought his show Improv4Humans from the podcast waves to the new stage in Alphabet City.

But as the day turned to night, I found myself back at the SVA Theater for Gravid Water - one of the most popular and incredible regular shows at The Upright Citizens Brigade in both New York and Los Angeles. The show couples improvisors with actors, and it goes like this:  The actor has memorized a legit play, and the improvisor, who hasn't seen the script or the play, will react to the scripted lines with improvised dialogue. It's a unique way of using "the game" to create a whole new level of improv. Plus, it can get absolutely insane.

Saturday's line up included Adam Pally and Julie Sharbutt who worked off the play Jailbait. Michael O'Brien and Tami Sagher did Sister of the Winter Madrigal. Jonathan Kaplan and John Lutz performed Painting X's on the Moon. Finally, Matt Walsh and Sandy Rustin enacted a scene from I Used to Write on Walls. Brilliant moments from Pally and Cross as their clueless off-the-cuff reaction to written dialogue propelled the action on stage in moments of genius.

With not much else to do but say "screw it" and wait on the long line at UCB, I headed over to the main place and eventually got in for the pre-midnight shows. This meant, that with the 12:00 Midnight theatre cleaning, where everyone gets kicked out and made to wait back on the long, long, line  outside. Leaving at midnight to face a mile long wait meant that I wasn't getting into The Benson Interruption, Match Game 76, and Sex In the City for Dudes. Oh well. The sadness is - the holy grail of DCM is Match Game; however, with  no Jack McBrayer again this year being degraded in hilarious good sportsmanship as the contestant all the faux celebrities love to hate, it's just not the same.

So, as mentioned, I made it in time for pre-midnight improv. Within that time block I saw the amazing NYC team The Chairman ... 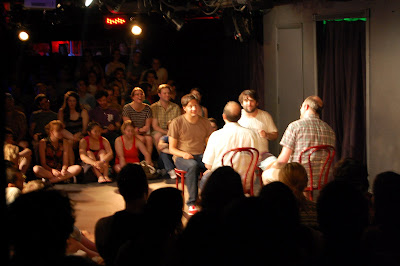 ...and ended my night with Ben Schwartz and his team Snowpants, a second performance for the weekend that was indeed a "sausage fest" but with the best sausages around: Schwartz, Walsh, Besser, Roberts, Adam Pally and Gil Ozeri. 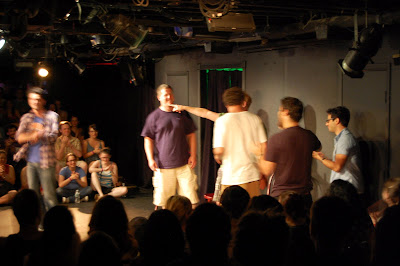 The Del Close Marathon of 2012 ended for me that evening. Sunday was a busy day filled with catching up with friends and family before I headed back to Los Angeles. There were so many teams I would loved to have seen from around the nation and the globe. I didn't get to attend the regular shows Death by Roo Roo, Law Firm, The Stepfathers, The NY Mets Monoscene or Wicked Fuckin' Queeyah. I even missed Amy Poehler in ASSSSCAT.  But there will be new line ups, new teams and new scenes next year. And The Upright Citizens Brigade puts on the best shows in the world all year 'round.
Posted by TVBlogster at 9:17 PM