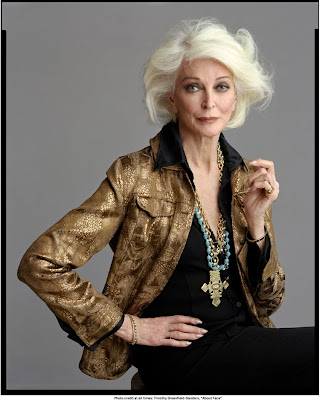 With the popularity of plastic surgery among movie stars, singers and models alike, one could surmise, given Betty's belief,  our pop icons are a bunch of wimpy sissies. In an effort to stave off quiet phones, lack of work, and the competition of younger, sexier nobodies coming up behind them, they have a little Botox here, some filler there, holding up their famous faces long enough until the turkey neck and jowls start to wiggle and the big knife is employed to slash away the years imprinted on their face.

They see the grim reaper coming down the hill, but when all is said, done and healed, they end up looking like the crypt keeper rather than a younger version of themselves.

There is irony to this, as beautifully revealed in last night's HBO premiere of About Face, a fascinating look into some of the most ravishing models of our time, who've bypassed the nip and tuck, and embraced their maturity. Produced by Timothy Greenfield-Sanders, this documentary features some of  the original super models:  Cheryl Tiegs, Christie Brinkley, Kim Alexis, Beverly Johnson, Carol Alt, Marisa Berenson to name a few. As their experiences are told in remembrances of parties, rock stars, cocaine use, exploitation and bad self images, they discuss overcoming the trappings of fame, professional adversity due to race, and how age has finally made them more comfortable in their own skin.

This isn't just a profile on the modeling profession as we know it. It's an insider look at the history of modelling. China Machado recalls her days on the runway in the 50's when fashion shows were all business, filled with buyers, magazines and ladies who lunched, as she walked the catwalk without a smile. It wasn't about mystique. It was about the clothes. Being one of the first Asian models in the field, Richard Avedon adored her, but once said she'd never be in demand because of her race. Beverly Johnson, the first African American model to grace the cover of Vogue, speaks of the hardships of breaking through when a model wasn't a magazine editor's concept of the ideal. 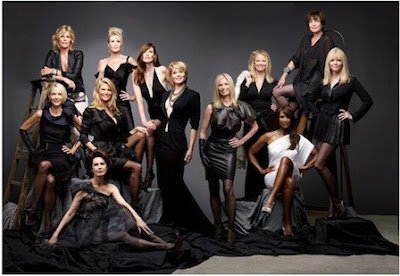 There isn't a model in the bunch who doesn't have a gnarly story. They were exploited and starved until family members couldn't recognize them. Their perfect body parts were dissected and judged by editors, photographers and agents right within earshot. Some model's pretty noses snorted the finest cocaine. Others lived on pills, booze, Studio 54, rock stars, the high life of Paris, Milan, New York, London, Paris, and parties, parties, parties.. But, as these lovelies left their 20's and entered their 30's, the new wave of up and coming young ones began to phase them out. Isabella Rosalini, once the face of Lancome and an A-lister at the chicest of chic parties, speaks frankly and with great humor about how, when she approached 40, the cosmetic company decided to go younger, despite the target market was of the same age. The reason? They aren't selling Lancome products to middle aged women, they are selling the concept of youth.


It would have been nice to have seen some of the famous British models who emulated the swinging 60's  such as Patti Boyd, Twiggy or Jean Shrimpton (who didn't even answer Greenfield-Sanders calls). As a George Harrison fan, I've always admired Boyd's ability to be fresh faced and adorable as she maintained the fashion image of the British invasion while being in the inner sanctum (and bed) of Rock and Roll royalty.

Although the models featured, mostly untouched by the surgeon's hand, have admitted they'd have some work done when the time comes, it's refreshing to hear these women, once known as a visual sexy presence rather than a vocal one, now wives and mothers, speak their strength today.  Some of them, such as the stunning, elegant Dell Orefice (pictured above), another model I've admired, are still in demand, extolling the concept of elegant, grace, and beauty of age.

About Face is currently airing on HBO. View your listings for available times.
Posted by TVBlogster at 1:07 PM

Email ThisBlogThis!Share to TwitterShare to FacebookShare to Pinterest
Labels: About Face, HBO