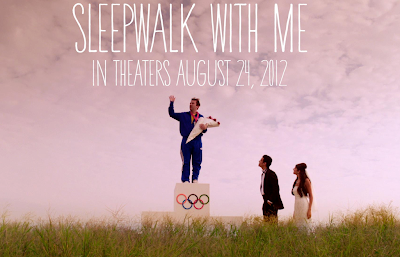 When I was in college, one of my roommates was a sleepwalker. She'd awake from a nap at four the in afternoon to answer a call, have a full blown conversation with her friend Phyllis about going out that night,  hang up, fall back asleep, and not remember the discussion at all when Phyllis came by to pick her up.

Once, late a night, I was in our living room watching Letterman. My roomie came down the stairs with her beloved ET beach towel, walked pass me wordlessly, ignored my question "Are you gonna watch Letterman?", went straight to the coat closet, opened the sliding door and draped the towel over our hung coats, as if to display the beauty that was Spielberg's and Michael Jackson's favorite space alien. She patted and primped the towel just right, revealing the beloved creature and his glowing finger. Then, she turned around, walked passed me and went right back upstairs leaving the closet door open to view the product of this weird encounter. I don't remember if I didn't care, or my interest in what I was watching distracted me, but I shrugged and went back to watching television.

Ten minutes passed, and I could hear her once again, trundling back down the stairs, but this time when she arrived in the living room, she was alert and talkative.

"Hey! Watching Dave? Whose on?" said my roomie.

Now, I was confused. The previous ET towel closet unveiling and her dead demeanor while doing it was already out of mind. But her 180 degree turn in disposition threw me. And that damn giant ET was hung like a R.E.M poster.

"Why did you come down here and put your ET beach towel over there?"  I said pointing over at the closet.

As I began to tell her about the ET encounter, she knew what happened. She was in the midst of  another round of zombie sleepwalking. As more episodes occurred, my other roommates and I became wise to it, and tried to protect her when we saw the signs. If she was tying her Culture Club cassettes to her feet to use them as ice skates - she was sleepwalking. If she was washing laundry in her bedroom (the laundry room was down the street - the nearest sink - in the bathroom), she was sleepwalking.  As long as we were there, she was safe. We also came to the conclusion that sleepwalking with friends to safeguard you was better than accidentally spraying oneself in the eyes with bug spray - which she did - more than once. 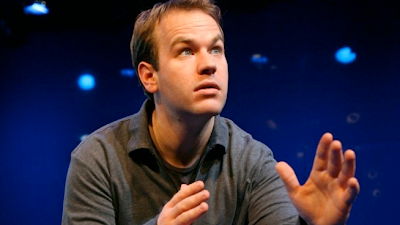 Comedian Mike Birbiglia appeared on Ira Glass' This American Life a few years ago to talk about his epic battle with sleepwalking. At the time, his one man show Sleepwalk With Me was an off-Broadway hit at the Bleecker Street Theater, and his book Sleepwalk with Me & Other Painfully True Stories debuted at 29 on the New York Times Best Sellers list. He spoke of the intensity of this disorder, how it would make him do life threatening things, walk anywhere, do anything, until one night, he actually hurt himself. As you can imagine, as a comedian with a sleep disorder, these experiences created terrific storytelling.

And...also the narrative for a film.  Directed by and starring Mike Birbiglia,  Sleepwalk With Me is an autobiographic pic that loosely illustrates Mike's life (in the guise of character Matt Pandamiglio) in his twenties, stressed out and worried about whether or not he should marry his longtime girlfriend. This anxiety is worked out through his sleepwalking episodes and through reality itself. It's produced by Ira Glass and co-stars Lauren Ambrose, Carol Kane with appearances by Marc Maron, Kirstin Schaal, Wyatt Cynac and David Wain. The film won the Best of Next Audience Award at Sundance, and screened at SXSW. IFC has picked up theatrical distribution rights as well.

I'm not one of the lucky ones who have seen this film yet, but just looking at the trailer makes one hope this becomes a late summer sleeper hit.  It looks charming, funny and fascinating.

Email ThisBlogThis!Share to TwitterShare to FacebookShare to Pinterest
Labels: Ira Glass, Mike Birbiglia, Sleepwalk With Me, This American Life