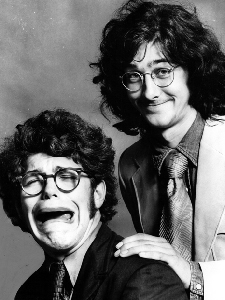 Tom Davis passed away today at the age of 59. He was one half of the legendary SNL comedy duo 'Franken and Davis'. I was unaware that he was suffering from tonsorial squamous cell carcinoma. In other words, he had head and neck cancer.

As Al Franken became a political pundit and Senator from Minneapolis, Davis remained in the background, helping out with the Ghostbusters III script and working on a book. However, drug addiction was his nemesis, and Davis spent three years in rehab.

He posted his feelings about his illness last month online, eloquently musing on his life and own death.

Rest in peace, Mr. Davis. You gave this child of the 70's something to stay up way past her bedtime for.