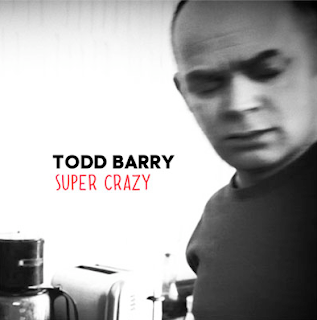 If you've ever watched Bored to Death, Flight of the Conchords ("I play the bongos") or the FX hit Louie, you've seen Todd Barry. Deadpan and dry, with a soft spoken deamanor, Barry's band of humor is unique with a burn that feels right. In fact, he so lovably strange, he played himself in Adult Swim's Delocated during scenes involving the Russian mafia's most hilarious and violently weird moments.

Todd Barry is bringing his brand of bizarre this month with the release of his new DVD Super Crazy, to be released July 24th.  Performed at New York's Gramercy Theater, Todd will contemplate travel tips, spaghetti and his aversion to germs ( which I hope puts Howie Mandel to shame because his case of germophobia which promotes fist bumps is getting tired). As a preamble to the release, Comedy Central will air the Super Crazy July 21st at 11pm.

Watch it! Pre-order the DVD!  And check out Todd's website for tour dates and other details of his life at www.toddbarry.comhttp://www.toddbarry.com/.
Posted by TVBlogster at 12:41 PM