The 60th Annual Emmy Awards: It Ended on Time 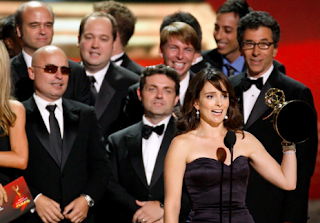 I just want to shout it. Tina! Tina! Tina! She’s the Mary Richards of television today, “This generation’s Elaine May,” as Alec Baldwin boasted. The lady brought them in. One for Best Writing for a Comedy, another for Best Acting in a Comedy, and another she shares with the crew for Best Comedy. Alright, so my “Office” people didn’t get it this year, but that’s ok. It was “30 Rock’s” night. The show has been mind blowing funny, incredibly well cast, guest stars galore who know how to blend well into a storyline. Oh, how I love “30 Rock”. NBC was the first company I worked for while in college and after graduation. Watching Tina Fey lead a cast of characters in an SNL-type television workplace sitcom is like visiting memories – if my memories had dialogue of funny written well by award winning writers.

If only the Emmy Awards ceremony wasn’t such a drag. Perhaps the look on John Krasinski’s face at the pre-ceremony red carpet tipped me off to what these actors go through. After being interviewed by Ryan Seacrest, Krasinski turned away with a faint look of dread, as if he were saying, “It’s hot as hell out here. I’m in a suit. Now I have to go into a theater and watch a crap festival of boredom when I could be home playing Madden or listening to Cold War Kids.” It was as if he was making run for it, away from the awkward Seacrest, whose interviews are about a scintillating as wads of wet paper balls hitting a wall.

Speaking of balls and Seacrest, the hilarity that never was continued to die when the first thing he said to Steve Carell was “Two words…Enlarged balls.” Nice attempt to be funny, Ryan. There is a story behind this. The day the WGA strike began back in October, Carell supposedly called in sick, claiming his ailment was “enlarged balls”. This story isn’t really true, and the comment was actually uttered by someone else, but boy our Ryan was all over it with his witty repartee, making Carell squirm, while his lovely funny lady wife Nancy looked at Seacrest as if his hair was about to explode.

As for the lackluster three hours of show, I think what got me were the hosts composed of the buffet of bland served up by Tom Bergeron, Heidi Klum, Ryan Seacrest, Howie Mandell and Jeff Probst. Why must we have reality television rubbed in our faces during a night filled with television that ranks in quality and genre? The evening flowed with the usual bit of forced humor and conviviality, carefully tip toeing around, the election, Sarah Palin, the financial crisis, Sarah Pain, the war and Sarah Palin. The feeling of watching glittering gowns and shiny tuxes trapped at the Nokia Theater, breathing in the proceedings on tender hooks was odd and coma inducing at the same time. There were no cute opening dance numbers at which to snark, no funny comedy clips. Remember when Conan O’Brien hosted the Emmys in 2006? He started the ceremony with a VT of him sitting on a private jet, sipping champagne and ready to embark on his journey from to to host the awards. Suddenly, his plane crashed, and he immediately found himself in an episode of “Lost”, which lead him to the set of “The Office”, “House” and “24”. It was clever, refreshing, and funny. To fans of these programs, it was a kick to see their favorite characters interact with Conan as he surrealistically became part of their story. When he landed on stage at the Emmy’s, he had just taken a journey around the dial (or remote), and began his master of ceremonies duties. Last night’s litany of hosts winged it onstage, tele-promter-less, mulling around in flop sweat, while William Shatner came on stage to help Bergeron rip off Klum’s fake tuxedo. Meanwhile, back in the fun pit known as the audience, men’s collars pinched, and women held their breath under the tight girth of their dresses. I sipped a martini in my pajamas.

The Emmy awards seem to be a hodgepodge of well deserved wins, understandable loses, and confusing selections. “30 Rock” deservedly swept the awards this year. Their show has been consistently well written, gut wrenchingly funny, and pitch perfect in tone and pace. Tina Fey’s wins in writing, best actress and best comedy were highly deserved. This fan of The Office was saddened by the fact the show wasn’t on it’s game this year. “30 Rock” has indeed usurped the crew at Dunder Mifflin for tops in laughs and writing.

Awards for “John Adams” was not a surprised. The mini-series was highly acclaimed, with stellar performances from Giamatti and Linney. “Recount” garnered some prizes. Although the writing and performances were riveting, the idea of living out that horrendous moment in election history made it difficult for me to past into the second hour of the film. Still, what I did see was wonderful, even if the memories were too jarring to continue.

As much as I adored Bryan Cranston in “Malcolm in the Middle”, where he should have won the lion’s share of Emmys (and apparently didn’t), his win for best actor in a drama for his performance in “Breaking Bad” was definitely a surprise. Perhaps it’s because “Mad Men” has gained a cult following is the critic’s darling of the year. As a fan of the show myself, it was disappointing not to see Jon Hamm win the best actor award. Kudos definitely go to , even though I am in the category of fans who think that got robbed.

Why “Entourage” continues to be nominated in the Best Comedy category astonishes me. Everyone knows the show hasn’t been a comedy for about two years now. The snubbing of “Flight of the Conchords” continues to confound. Perhaps the Emmy voters like to stick to what they know. Maybe people from singing funny, melodic song scares them? Jeremy Piven beating out Patrick Neal Harris and Rainn Wilson for Actor in a Comedy Series makes me believe that someone is paying off someone somewhere. continues to make the character of Dwight a compelling, funny element in “The Office”. Harris always brings out a quirky, intelligent humor in his role as Barney Stinson in “How I Met Your Mother”. This award was up for grabs between them. Having to watch raving, formulaic fits of anger from Ari Gold as per Mr. Piven doesn’t really feel like something worthy of anymore Emmys. He’s already got the prize. Let someone else carry that heavy thing home.

Highlight of the night was Ricky Gervais threatening Steve Carell to fork over his Emmy award, won last year for his work on "Extras". For two years straight, we've had the antics of Carell, Colbert, Stewart and Gervais stirring the cauldron of boring with some spicy fun. Why can't these guys be the hosts of next year's Emmy award ceremony?


The cast of “Mad Men” are delectable to behold. Jon Hamm, John Slattery (another actor who lost out last night) and the boys of Sterling Cooper are maddening in their handsomeness. The women are beautiful. January Jones is such a pleasure to see, Elizabeth Moss is stunningly adorable, and Christina Hendricks is a vision of lusciousness. They do not make women like that in anymore – all curves and bumps. Bless her. But all shallow beauty aside, “Mad Men” came home the winners of Best Drama, making history as the first cable show to win best drama anywhere this side of “The Sopranos”. It was a satisfying end to an otherwise less than surprising and entertaining evening. As speeches were rushed and drowned out in "shut the fuck up" music, and presenters raced to get their comments pronounced in time, the show clocked in just under three hours. So, I guess that in itself is an accomplishment. Apparently it was the lowest rated Emmy Awards ever. Word to the Academy...get better hosts. Perhaps Gervais and Carell will be free?

We lost some great people: Bernie Brillstein, George Carlin, Charleton Heston; however, one person’s face flashed across the screen during the tear jerking stream of goodbyes that gave me pause. Roger King passed away in December 2007. I was his assistant from 1993 to 1996. I remember reading about his death in Variety the Monday after the weekend he passed away. The expression has been used before, but it serves a purpose: It felt like a giant Redwood had fallen somewhere. He was a formidable man. Full of vinegar one minute, a playful good ‘ol boy the next. He was the gruff executive who came from the school of hard knocks, brought up by a family who found success after working hard and paving paths in the world of syndication where no one paved them before. His voice boomed through the halls of King World. “Debi, any messages?” I can still hear him. To be honest, I never got that close to Roger as a boss or friend. He kept some people at a distance, and I always felt he trusted very few. It was a trait I understood and respected. Roger died of a massive stroke. I remember thinking, “Man, even when he gets sick, he doesn’t do it half assed. He does it big time.” May he be placing his bets at the Baccarat table in that big casino in the sky.

Posted by TVBlogster at 1:00 PM