"The Office" Season Five: Count Down 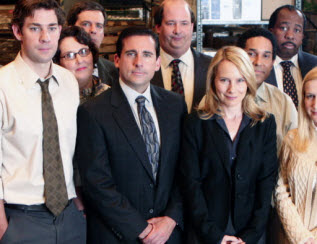 After a summer of speculation and an early fall of spoiler filled angst, "The Office" begins it's fifth season tomorrow night, NBC 9:00pm ET/8:00pm CT. In this one hour welcome back installment, entitled "Weight Loss", our friends at Dunder Mifflin will be participating in a branch-wide diet challenge, possibly putting "Biggest Loser" to shame. Spoilers have hinted that kooky Kelly bought a tapeworm off of Creed to expedite the process (Creed,"That wasn't a tapeworm"), and Mifflin-ites of the more rotund variety will be balking at the challenge. Is this the episode with the fabled "rain storm" of momentous proportions? Will it be between Jim and Pam? When is that freaking proposal going to happen? Because apparently Jim hasn't done the deed yet.

Spoilers have claimed a that a late October episode will show Pam putting together a New York City reunion between Jim and his brothers in an attempt to ingratiate the Halperts in justifying her commitment to Jim. Oh dear. I fear that the Halperts are a little ticked that our Pammy has dragged Jim through the mud of emotion a little too often, and are pulling their guards up. As per Jenna, the reunion doesn't really turn out well. I image it's more hilarity than tragedy, but who knows?

And crazy Jan. Bitchy, annoying Jan. She's pregnant and will not go away. Holly, the one true love Michael should marry and have babies and picket fences with, is still around. Melora Hardin mentioned in an interview with Kristin Dos Santos from E! that Jan will continue to dig her hooks into Michael. She even admitted to wanting a cat fight between Jan and Holly. Dear Greg Daniels and Paul Lieberstein, do not do this at your own peril. Never...ever go down the gutter path of cat fights on this show. I'd rather watch Rachel Zoe's reality show and bang my head with a hammer than see this.

As for Angela, Dwight and Andy...I have to admit, I actually don't care. Angela and Dwight should be together. Andy should go off and find another Cornell grad and make babies who wear plaid pants and polo shirts with the collar popped. I love Andy, but I don't really care about Andy and Angela.