Spread the Love of Jim and Pam 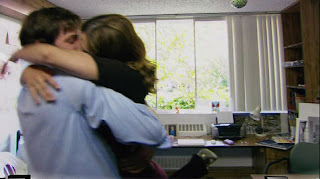 The long overdue on-air promotion for the new season of "The Office" aired last night , and has the Office blogosphere up in arms at the beauty of the thing. Season Five premieres on September 25th at 9am with an hour long episode entitled "Weight Loss". It will be the first time we actually see summertime for the Dunder Mifflin-ites. The crew in Scranton embark on some crazy branch competition on who drops the most pounds. (Do I smell a "The Biggest Loser" tie in?). As per the promo, it appears Team Scott will be doing some yoga under the instruction of Ms. Flax. She also seems to be Michael's BFF as seen in a sympatico hip hop sign off "a-wicka-wicka-wicka". Oh, Holly. How I love you. You make Michael human. Please stay. Tell Jan to take her lab baby and move out of town.

Pam will be away at Pratt, and we'll see eight weeks of this in the first episode (in between what I presume are eight commercial breaks). There has been some controversy on whether or not an internship is involved here. Paul Leiberstein has used the word "internship" while describing Pam's time in New York which freaks out every fan to kingdom come. An internship isn't going to classes at Pratt, it's going out on the field and working for school credit. So, if there is an "internship", does that mean Pam stays in New York longer than originally planned? I will be one pissed off bunny if that's the case.

But no matter. The promo flashed our couple embracing. Jim lunges in, Pam gets swept off her feet. A talking head shot seems to deliberately show Pam's hands so we fans get the cryptic signal that there is no ring, and therefore the engagement we are hitching our hopes on has not yet happened. But seeing Pam in her dorm room, in Jim's embrace, as his photo rests lovingly on the desk that holds her art supplies, and doofus glasses and printer and notes from Halpert filled with encouragement, it is heart warming. But New York is going to open her mind up to so many things. Why would should go back to Dunder Mifflin as a receptionist? We have two weeks to ponder this. Two weeks!
Posted by TVBlogster at 6:50 AM