"Early In The Morning, About the Break of Day" 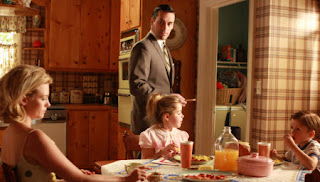 Reality poked it's ugly Jimmy Barrett head into the pretty picture of perfect in Sunday's "Mad Men" (Episode: "A Night to Remember"). After the affairs and lusty surrender to Jimmy's pushy and hoary wife Bobby, Betty threw down the hammer and held up Don's infidelity to his face. He denied away, living in his own state of "it never happened....it's shocking how this all never happened", toying with Betty's sanity, telling her she was wrong. Yet, the pretty blond stood by her guns. This is were the bride and groom on top of the wedding cake drips off the top and falls into the garbage. Betty found her groove. She woke up. Suddenly, the black and white sixties are on the verge of switching to color, not just for Betty, but for the women of "Mad Men".

Much like Don, Peggy Olsen lives her own lie. Her denial is held firm by mental anguish and sheer obstinace. Her accomplishment of landing a copywriter job in a big advertising firm has provided a shield from the realities of her home life, where her mother and sister use passive aggression to open her eyes to her Catholic duties, and the child she bore. When Peggy is asked by her priest, the young Father Gill to help with flyers for a fundraiser, per pride gets in her way. Another sin? Although her defiance of the CYO committee is understandable, there is a sense of conceit over the ladies who disapprove of "A Night To Remember" motif. How dare these old biddies question the creative mind of a Madison Avenue copywriter? Of course she's sensitive to this. Her job is her escape. It's her life. It's what she believes defines her. 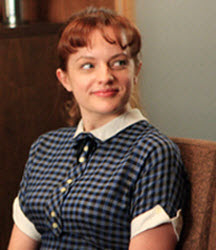 Peggy is the ultimate enigma to the audience and to Father Gill, who won't let on his knowledge of her baby; yet, he tries to chip away at her patience, indirectly breaking her down to seek the Lord's help in admitting she had the child. It's interesting to annoy someone into admitting something, and it seems young Father Gill may have broken an emotional wall in that pony tailed head of hers. Peggy held onto her belly as he left the room, perhaps trying to connect to the child she carried and ignored. Later that night, alone in her bath, she sat like stone in the same trance in which we viewed Betty. One could compare the vision to a baptism. For one moment she awakes in a startled fit, almost as if everything she denied hit her between the eyes. It will take subsequent episodes to see how that might play out.

And there is Joan, the wowser, with breasts like bullets and curves that kill. She's a husband seeker who landed a doctor who'd like to keep her in bon-bons for the rest of her life. But being placed as a temporary Broadcast Operations liaison for Harry, allowed her to realize she had a knack for more than just one day ditching the carbon copies for the hairnet and slippers. Reading soap opera scripts and anticipating the needs of the sponsor and network was actually a blast. As Harry introduced Joan to her replacement, a young man with dumb stories and nary a clue about the job, the disappointment, so palpable, seemed to rise like bile into her throat, quietly knocking her for a loop. Joan's image, once the high flying top secretary, riding the wave of gorgeous glamor on Madison Avenue, kept her stuck into the ever solid mold of sexy assistant. At the end of the day, all she has to show for it are bra marks that denote the burden of holding those triple D's high while wiggling those hips, much, perhaps, to her own detriment. 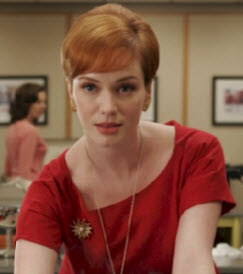 Living a lie is an nasty business. When the truth comes down, it destroys all in its path, creating a catalyst that may awaken others around them to reality. As we observe from the AMC 's original series "Mad Men", Don Draper exists in a cloud of mirrors and falsehoods, where even his own name isn't his own. He borrowed someone else's identity, and created an illusion of Madison Avenue visions as a lifestyle. He found the perfect pretty blond girl and married her. They had the two beautiful children and put them in a house in the country. For Don, or Dick Whitman, it destroyed a family he never knew - the real Draper family - who, at this time, exist in a state of nothingness. His lie destroyed his lonely step brother, who on his last tether of hope, reached out to Don, only to be spurned. Now it will destroy the very image he built up on a pile of lies. However, will the women and children who make up the collateral damage find a path to their own truth? It's too early too tell. They've all just woken up.
Posted by TVBlogster at 8:31 AM