David Letterman Speaks His Mind and "The Office" Tonight! 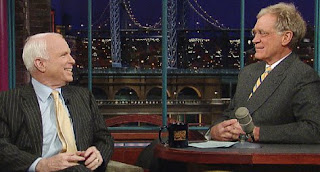 "The road to the White House goes through me!" proclaimed David Letterman in his usual self deprecating way. But was he wrong? Sure, he's just a late night talk show host, but isn't this the exact forum political pundits and campaign war horses strive to join? Sitting on Letterman or Leno's sofa, speaking to the American public in the dark of the night has always been a prime platform for political discourse. Even if Dave is a bit cantankerous, ornery and perhaps lost his funny edginess, monologues discussed by late night comedians are part of the fabric of American watercooler discussion. The exposure humanizes a candidate, as we see him joke and speak of himself as a regular human being. Indeed, perhaps we shouldn't be voting in Presidents who are just like us. We should strive for someone better; yet, when McCain ditches Letterman, claiming his campaign is on hold so he can head out to Washington to help cure the economic catastrophe (that his party helped to precipitate), only to be found on the very same network with Katie Couric posing questions, one has to surmise that McCain is adrift.

Late Night with David Letterman was my obsession in college back in the 80's. I've seen him change the course of television comedy by using ironic humor to it's fullest. Along with Johnny Carson, he changed the complexion of comedy today. I'm glad he got his point across. Years ago, he would have kept it to himself. Who can blame him? When a guest flakes out, what better way to fill up dead air than to diss and expose him at the same time? 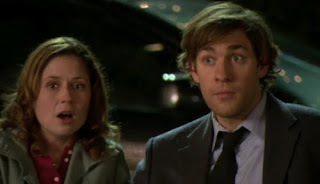 Hey "Office" fans, remember this? The look of shock in their eyes? The now famous Jim/Pam/Andy/Angela ring block? Pam is going to New York to study art, and Jim is home alone. We get to see the outcome of all this tonight on "The Office" season premiere on NBC 9pm! It feels like opening day in baseball. Ah...the smell of freshly mowed grass beneath the fences of the Dunder Mifflin parking lot. The new paper smell of the supply closets. The piney aroma of Phyllis' perfume wafting from the break room. The sound of Michael Scott weeping in a corner after Jan rips him a new one. And Holly. Oh Holly. Back to give us a dose of quirky, lovable sanity. Please kill Jan in a freak coffee pot explosion. Save the baby and raise it as your own.
Posted by TVBlogster at 10:34 AM