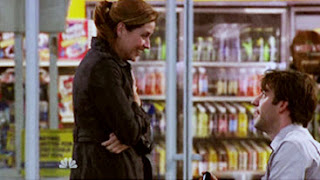 Thank you Greg Daniels, Gene Stupnitsky, Gene Eisenberg and Paul Leiberstein, show runner, producer and writers of "The Office" season five premiere. You have melted my heart, unleashed the summer long feeling of despair over the state of "The Office", relinquished the Fatwa I placed on your heads. You had been put on notice after the exasperating last five minutes of May's season finale, "Goodbye Toby", where instead of getting a Beesly/Halpert proposal, you left us with Dwight's sweaty back and a snitty look from the newly christened office Ho - Angela. This fan cried foul at the sitcommy contrivance, the betrayal of "Office" high standards by fearing the show was doomed. Fonzie's shark loomed in the distance. The gate to the pasture was open, and I was ready to put you out.

Instead, you flipped the awesome switch, and reverted back to the fun filled world of Dunder Mifflin, giving us satisfying results to open ended issues. You gave us summer - a Dunder Mifflin summer - filled with a very likely branch-to-branch weight loss challenge, bringing out the extreme dieter in Kelly, the creepy nature of Creed, the Nazi commander of Dwight, and the dorky-ness of Holly Flax, who floats Michael's boat from ship to shore, break room to warehouse. 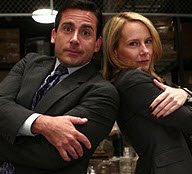 As Dwight and Angela rekindled their backroom passion, Andy Bernard tugged at our heartstrings as he earnestly planned his wedding to Miss Martin, who half heartedly went through the motions of being sort of in-like with the Nard dog; however, not so much with the Cornell bred acapella posse "Here Comes Treble", who will collectively be his best man and the wedding band for the event. Oh, Angela loved that. She loved it so much she paged Dwight for a quickie in the warehouse closet.

Michael is still a student of the Jim Halpert training course: “How to be Friends Before Lovers: 101”. It's painful, but so needed for the impulsive Michael Scott, whose reserve may have to hold out until he's learned a lesson in patience. As Holly embarks on a date with a lame yoga instructor, Michael swallows his hurt in fits of grunts and spastic verbiage as Holly stares at him wondering if the Heimlich lessons she got in HR camp might be useful about now. Michael blames Jim for his soul sucking hurt, telling him he’s not getting paid for the year. Jim looks at camera. Michael is an idiot.

Ryan's back, and he's still the d-bag he was when we last saw him, which was on YouTube being lead away in handcuffs for fraud. It seems a stretch to have him come back to Dunder Mifflin, even as a replacement receptionist considering he committed a crime against the company. Realistic? I guess it doesn't matter. Fans wanted to see this happen to Ryan so his big fat coke absorbed head would find humility and remorse. But not this Ryan Howard. This Ryan Howard still has the burning flames of revenge for those who will gloat or wrong him. He even keeps a list, so that "when I'm back on top" he'll get even. Back on top? On top of what? The top bunk bed in prison after being incarcerated for his second white collar crime?

Let’s keep score on Ryan’s Revenge Bucket List shall we? Jim Halpert for reminding him that his community service was court ordered? Check. Kevin Malone for giving him a noogie and calling him Fire Guy? Check. Of course, he's a bad dog who wants to come home to Kelly, luring her with the promise that she can pick him up at eight and buy him drinks. "No thanks..." "See you around then." "It's a small office." Oh Kelly, your high road knows no bounds. That was a gratifying exchange. Maybe her starvation diet weakened her into being smart? Or perhaps the hospital pumped some smart sauce into her IV the day her three day cleanse diet made her hit the floor.

Meanwhile, back to life on the warehouse cattle scale: The weekly weigh in is taking its toll as the weeks go by. First week had Pam weighed in with the group, then kicked off the scale when Michael realized she'd be leaving. As the Dunder Mifflin dieters calculated her weight in their heads, we begin to realize that our Pam-cake is indeed splitting from the crew, and this symbolic photo was taken. Sadness. 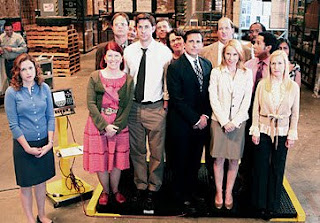 The weeks go by and the weight loss stalls despite starvation, chicken eating, and a proposed cake-free birthday party where a cheese cake was smuggled in anyway.Jim promises to lose 65lbs, which would render him invisible to the naked eye. Tapeworms not withstanding, nerves are frayed as collective poundage fluctuates between losing one pound to gaining a few. Hmmm...maybe Dwight's growing gut has something to do with that. Yes, Dwight. You are the problem.

Who am I kidding? I watch"The Office" for the beauteous love of Jim and Pam. I’m a number one fan of seeing Pam use her talent for a better job, but the idea of her going to Pratt has given me indigestion. Oh, the possibilities. The hipsters, the higher learning, the fancy world that will make Pam question her life in with Jim. Who the hells cares! It took a rainy day at a rest stop to kill all my doubt. As Jim looked up at Pam like a child, and as Pam gasped for breath, the fireworks from that moment, that “yes”, that kiss, was better than any cherry bomb or firecracker flare that arose from the Dunder Mifflin parking lot in May's season finale. The years of misery, hurt, and confusion ended for Jim. He lost of ton of emotional weight, and Pam gained 180 pounds of floppy haired love for the rest of her life. Pam has her guy, and Halpert got the girl. It was a good day. 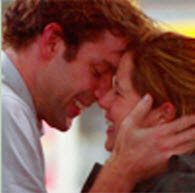 Next episode entitled “Business Ethics” will air on Thursday, October 9th at 9pm, may Daniels and his crew of merry writers keep it up. If the season premiere is anything to go by, this is going to be a great year.

Posted by TVBlogster at 8:43 AM