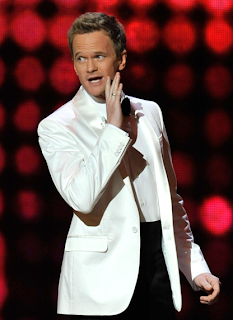 Nailed it... Neil Patrick Harris made what is usually a laborious night of viewing into a fast paced, funny pleasure. He was constantly applauded for doing a great job by presenters and winners alike. It was well earned.

There were some nice moments and some curious ones. 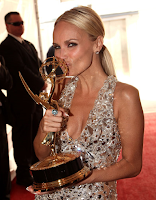 The lovable and insanely talented Kristin Chenoweth won for her role as Olive in the now sadly canceled Pushing Daisies. Her portrayal of the lovelorn pie making assistant was funny, heartbreaking and memorable. So nice to see this win.

Both Jessica Lange and Drew Barrymore nailed Big and Little Edie Beale in the HBO bio pic Grey Gardens. Since they both couldn't win - the trophy went to Lange, who truly became the eccentric matriarch in the role, crooning "Tea for Two" with the same crackled howl as the original dame.

Winners who were destined to win. AKA...no brainer: 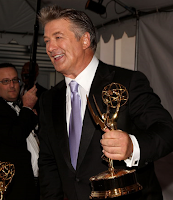 Alec Baldwin is the funniest man on the planet right now. Hands down. No discussion. My friend Marie has intense dreams about him. His talent haunts the minds of married women. Her husband doesn't even care. That's the power of Baldwin. 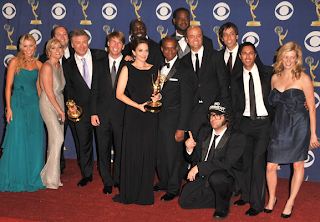 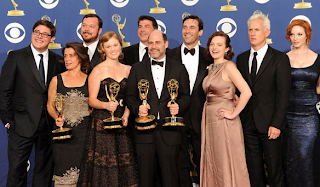 Well, big duh on this one. Jon Hamm may have lost out in best actor in a drama category to the amazing Bryan Cranston (Breaking Bad), but Mad Men won in the best drama category. Rightly so. Also, Matt Weiner and Kate Gordon grabbed the best writing for a drama Emmy for the sublime episode "Meditations in an Emergency".

The Daily Show won for best writing in a variety, music or comedy series and best variety, music and comedy series. It was toss up between Stewart and Colbert's staff and crew who write and produce intensely funny, smart, hard hitting political commentary five days a week. The Daily Show pulls through by a hair because they have the brilliant knack of providing faux news with intelligent observations all the while nabbing bullshitters while they are bullshitting. 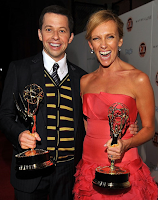 This is where the concept that comedy is subjective comes to play. I've enjoyed Jon Cryer in Two and a Half Men, but he's never knocked my socks off. He was up against two 30 Rock favorites - McBrayer and Morgan - who steal prime time laughs every week. How is Cryer funnier than Tracy or Jack? Really? Also, Toni Collette is a fabulous actress, but I find her to be an over acting headache in the unfunny and annoying United States of Tara. How is she funnier than Tina Fey or Sarah Silverman? I wandered the halls of my house last night wondering if 35 years of comedy worship was all a lie.

Needless to say, I didn't feel their wins. But still it was a good night for Emmy. Even if some of my favorites didn't get a trophy (I'm looking at you Aaron Paul and Elizabeth Moss...wait 'til next year), that's another awards show done. Afterwards, I flipped over to Mad Men and watched an executive's foot get mowed off with a John Deere tractor in the offices of Sterling Cooper. So, despite seeing some of my fave people lose the Emmy, the night wasn't entirely a loss.
Posted by TVBlogster at 8:25 AM