The "I Can't Believe I'm A Sap For These Two" Dept. 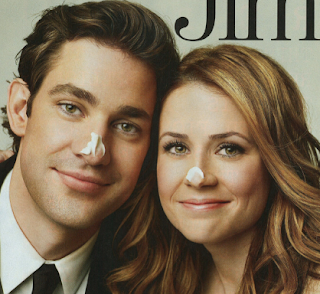 After five seasons of heartbreak, horror, sadness, sobbing, nail biting and hating on Karen and Roy, Jim and Pam are finally on the brink of marriage and baby. My days of sweating over this fictional couple are over - which is a relief because I'm not much of a romance, "oh what a cute couple" kind of person. But Jim and Pam (and Tim and Dawn for that matter) were so realistic in their situation, and hit it so close to the bone, that it got to me.

Sadly, season five dimmed my love for The Office and for the future Halperts. Some thought it was the second coming of the now legendary season two. I thought it was a bit boring with only a few highlight episodes ("Customer Survey", "Circuit Lecture I and II", "Company Picnic"), as the story lines on the couple petered out after Pam's return from New York (a Pratt storyline that went nowhere) and Jim turned to wallpaper paste in the background. I could have sworn Ms. Beesly had his balls in a box on the top shelf of their garage. Wasn't loving the new Pam.

The Office premiered last Thursday with the episode entitled "Gossip". It was fine. Didn't make me want to run out and write about it. Fans online loved it, which probably says more about my picky nature than what is actually great TV. Yet, last night's episode "The Meeting" was more like it. Jim showed his professional side and business acumen beautifully. It's also nice to see a forceful, angry Jim, ready to fend for himself, ensuring security for his new family. Pam returned to her old self (careful of what she says to co-workers, going with the flow, supporting Jim) which makes me love her again. We also discovered a new duo dynamic on the show: Toby and Dwight - the Scranton version of Holmes and Watson as they sleuthed out Darryl's attempt at workers comp fraud.

With the wedding episode to air on October 8th ("Niagara), perhaps season six is going to be awesome after all.
Posted by TVBlogster at 12:26 PM