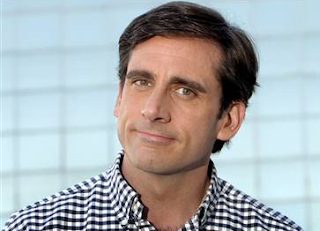 Well, we all knew this was coming. While promoting the movie Date Night earlier this year, Steve Carell tipped off to the press that he would be leaving the NBC hit series The Office in 2011. It's brought up much debate in the fan community. Many feel the show cannot go on without the character of Michael Scott. Other fans feel that a reboot with a new head character in charge of the Dunder Mifflin office will infuse new blood and recharge the weak battery of a decent ensemble cast. After all, that is what made The Office must see television for many a year: a wonderful group of characters that held equality in laughs and wove well into storylines. One can argue that no one is really "the star"on this show. I agree. Nevertheless, I'm of the camp that feels the show should end when Carell hands in his ID badge.

A tremendous cast needs to rally around a central figure. Michael Scott is the captain and navigator of this ship. His petulant behavior stems from ego, neediness and a sad yet heartwarming loneliness. These elements launched many storylines that fleshed out the everyman lovability of the Dunder Mifflin crew. For every temper tantrum and furrowed brow Michael provided, regardless of how exhausting it was for characters and viewers alike, we'd see the reason for Michael's behavior. We'd ultimately find that he was lonely. His was virtually ignored during his childhood. He wants love and children, but it's always out of reach. So he bullies. He calls meetings every half hour. He makes scenes and loves to stir the pot of gossip and make the office a black hole of procrastination all in the name of 'fun'. The idiosyncrasies of Michael produced a domino effect over the past six seasons. Jim and Pam mothered him. Dwight kissed his ass. Oscar hated his guts. Kevin was clueless and Kelly blissfully unaware of his dumbass deeds while dreaming about different shades of pink. If we didn't have the tentacles of Michael's ridiculousness reaching out to each character, we wouldn't have about 90% of the storylines that gave life to six years of often hilarious and sometimes disappointing episodes of The Office. Carell created this monster. We love him for it.

When Steve Carell leaves the Dunder Mifflin set for the last time after the season finale next year, I hope that will be the end of The Office. It's understandable that the ensemble could continue with a new boss causing a new kind of chaos each episode; however, the heart and soul will change. Indeed, The Office is not "The Steve Carell Show", but when a show is anchored by a central character we all know and love/hate since it's inception (at least in this case, the US), and we find the quality of the show has declined, perhaps it's time for everyone to move on.

Creator Ricky Gervais knew this when he ended the UK's The Office with a poignant sense of closure after two seasons and a Christmas special. Speaking of the devil, Gervais gave Carell his blessing on his blog the other day at http://RickyGervais.com.
Posted by TVBlogster at 8:44 AM