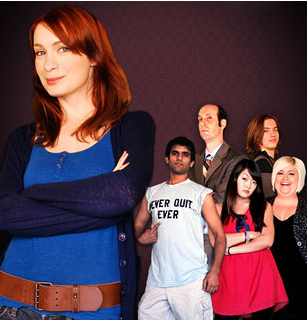 The beauty with web series programming is that the creators have a freedom to write, direct and produce their own content without anyone telling them what to do. Felicia Day is an actress who has been an addicted video gamer for years, having spent her down time on film and TV sets playing WOW with relentless zeal. Taking some of that online experience and personal showbiz know how into practice, she became the creator, star and director of one the most popular web shows streaming today - The Guild. If you haven't clicked across this one, do it now. It's a fun and quirky series about the antics of a group of online gamers who become friends offline. It has caused a buzz on the web for a few years now, and has won loads of awards.

Previous seasons of the series are available on DVD through Amazon with commentary and special features. Not bad for doing it yourself. Season four has just started streaming and available for download at Zune marketplace, Bing and MSN. It arrives just in time for Comic Con, where Day and cast of The Guild will be on hand promoting this terrific geeky show.

Posted by TVBlogster at 8:13 AM

Email ThisBlogThis!Share to TwitterShare to FacebookShare to Pinterest
Labels: Felicia Day, The Guild