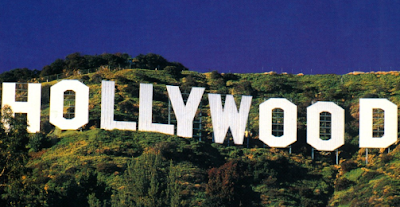 For some New Yorkers and general Americans or people of other countries, Los Angeles appears to be a world of fake boobs, spray tans, plastic surgery, Lindsay Lohan amber alerts and getting groped "hello" by Andy Dick. I believe that only a fraction of this is true. For me, LA harbors some amazing comedic talent in the country. Many of them started in New York, and due to pilot season, TV development deals and other career opportunities, made the move out west. Yet, when they aren't appearing in a sitcom or film, they still work on stage and create comedy in intimate environs. 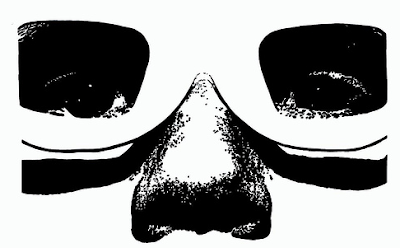 Heaps of articles on The Upright Citizens Brigade are written here because, like Juan Valdez who grows the richest coffee in Columbia, the theater harvests the best comedians on television and film today. Once they become big shots on 30 Rock or SNL, they still come back to entertain us little people as if they've never left - because they are basically funny, cool humans.

I've been at UCBLA many times, but I returned last week to haunt the theater in Hollywood to sort of bone up for next weekend's Del Close Marathon at UCB in New York. I caught some of my favorite left coast shows that are must see entertainment.

Here is what I saw with my own eyes: 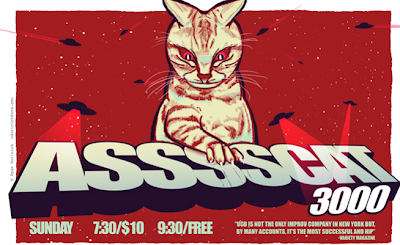 ASSSSCAT 3000
UCB is known for Improv. They teach it. They worship it. The theater does some amazing sketch, but its building blocks rest on the many Improv teams that perform on both coasts. ASSSSCAT, to me, is the big granddaddy of Improv at the theater. It's performed each weekend at UCBLA and UCBNYC (check site because each coast has a different schedule) where a guest monologist tells a story based on an audience member's suggestion launching three or four beats (beats are kind of like scenes). What makes it amazing is that the guest for the evening could be anyone. Seth Meyers, John Krasinski, Billy Bragg, Will Arnett - anyone. Last Saturday's show had comedian Jen Kirkman, and her stories about her trip to France were hilarious, prompting funny scene work from Ian Roberts, Matt Besser, Sean Conroy, Danielle Schneider and Andy Daly. And by the way....they all have some TV projects coming up: 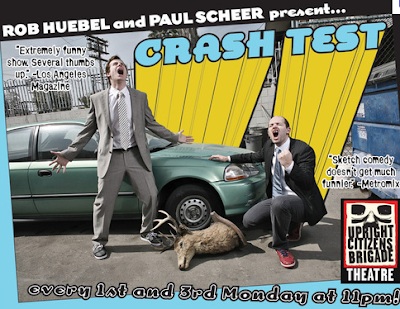 Crash Test
Rob Huebel and Paul Scheer host Crash Test on the first and third Mondays of every month. It's basically orgasmic comedy. Paul and Rob have such a solid friendship and comedic chemistry that they are kind like two funny beasts with one back (but not in the sex way). They banter, rant, rave, laugh, talk about anything. But what also makes Crash Test so special is the audience. Many members of the crowd are regular attendees who have some back and forth discussion with Huebel and Scheer. These people are regaled with "baby"nicknames such as "Baby Stargazer", "Baby Twilight", "Baby Glenn Beck". Then, there is Frank Howley, (I call him "Baby Frank" - likely an unofficial baby name) who comes to every show (at least when I'm there) and sits in the same seat, first row, on stage. Woven between the audience banter, on stage antics and videos is a lineup of funny stand up comedians who take the laughter up a notch. Monday's show welcomed Heather Thomas, John Wengert, Sean Conroy and Rob Delaney.

Paul and Rob have upcoming TV projects already mentioned on this blog. Yet, mentioning it again won't hurt: 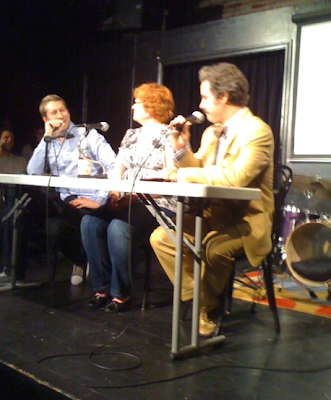 Comedy Death Ray Podcast
Podcasts are busting with comedy talk shows, but Comedy Death Ray's weekly internet radio show, hosted by Scott Aukerman, mixes up the format with characters, sketch and straightforward interviews. It streams on Indie103.1 each Friday at 12noon PT/3pm ET. Once in a while, Scott will take the podcast live as he did on Tuesday night before Comedy Death Ray's weekly standard show, when he hosted a pre-Comic Con edition of CDR Radio with comic writer Gail Simone and comedian Paul F. Tompkins, known for his CDR characterizations of Ice Tea, Sir Andrew Lloyd Webber and TLC' s Cake Boss. My quick iPhone photo is above. 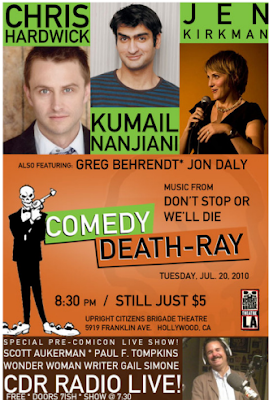 Comedy Death Ray
Proceeding Aukerman's Comedy Death Ray Radio Live was Comedy Death Ray itself - a weekly showcase of stand up and sketch. I was lucky to have gone on this particular Tuesday since David Spade and Louis CK dropped in to do some material. In between the comedians Jen Kirman, Kumail Nunjiani, Greg Berendt and Chris Hardwicke was UCB's own Jon Daly as Bill Cosby Bukowski, reading from his selection of Jello Pudding stories which made me loose a chunk of my lung from traumatic laughter. 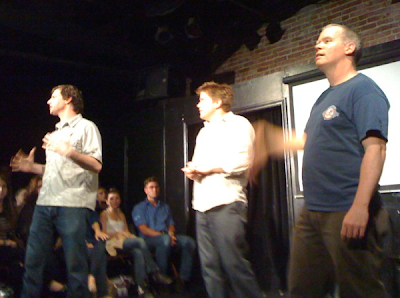 Facebook
Every Wednesday at UCBLA the lucky people of Los Angeles can see Facebook - because they can. I wish we had this in New York. Sometimes I think I'm moving to this the west coast (next year, in fact) just so I can sit in the audience of this show every week. Two audience members are selected from the audience to share their Facebook accounts and Improv is performed based on their photos and stories. Last Wednesday's line up was out a few people. Paul Scheer usually participates, but I believe Comic Con took him away and regular Seth Morris was out, but Huebel, Chad Carter and Owen Burke, as usual, made Improv look so simple. (It isn't, but it's fun.)

So that's what I did on my summer vacation. I basically did what I do during the year when I can get to LA and did it even more. The excitement is rising for the Del Close Marathon next week, so more fun in the land of Improv will be had. I'll cover it here.
Posted by TVBlogster at 8:45 AM