Women of 'The Daily Show' Speak 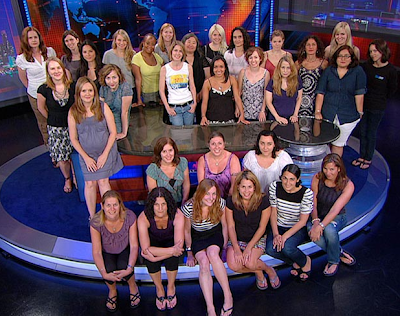 Dear Women of the Daily Show,

Thank you for your incredible letter responding to Jezebel on the issue of the lack of women in comedy. Your hard work and dedication have gone unnoticed by the viewing public because you run such a smooth and difficult operation behind the scenes. We viewers tend to think is easy. Of course, it's not.

I always thought Jon Stewart was a decent man, probably difficult at times and demanding at best. Who wouldn't be? If any of us were in his shoes, we'd know that the glare of the public light is harsh, the deadlines until taping are brutal, and the need to create smart, mind blowing news commentary is mandatory. Knowing you all deal with the dynamics of a well respected fake news program that provides important commentary and calls out the hypocrisy in television news and politics, humbles me at best.

You missed the point.

There was never any doubt that The Daily Show employs smart, hard working women behind the camera. The question lies in the fact that women are a scarce commodity as TDS correspondents. I don't know what really goes on behind the scenes or in the writer's room, because no - I don't work there. I'm a viewer with eyes and I can only calls them as I sees them.

There's been a lot of belly aching about the lack of females writing funny bits. Of course, there are ladies who play ball with the boys in the writer's room - Jessie Klein on SNL, Morgan Murphy on Fallon, but it's still an issue in the industry. It may be why I have been unable to try my hand at TV writing. The stories scare the b'geebs out of me.

Furthermore, in the group photo you've kindly provided, there are only two women that grace the camera as correspondents: Samantha Bee and Kristen Schaal. Both are rarely seen, especially the latter. I have no problem that after years of not adding much female talent to your roster, you find Maxim bunny and G4's Attack of the Show's Olivia Munn as a new face in the line up. She's cute and somewhat funny. But if you gave us a few more evenings of Bee or Schaal, you might even out the male to female on air ratio. Also, putting on a chick whose only background is showing her hottness in a lad mag and eating sausages on camera only solidifies the boys club rants.

So here's to the hard working women on The Daily Show. I admire your longevity and your smarts. I just wish you'd understand why Jezebel broached the issue of your program being a boys club. We as viewers and lovers of comedy only hear the words written and see the talent on camera. The testosterone out wieghs the estrogen here. It would be cool to view one or two more consistently contributing female correspondents. It wouldn't hurt if they wrote some of those words too. Ladies can roll with the punches with the big boys too. Tina Fey, anyone?

Some nobody with a blog

To read some background on what I'm writing about - here is the original Jezebel article posted here. www.jezebel.com