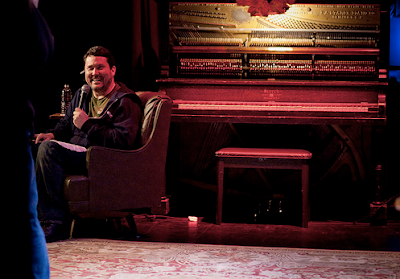 Photo by Liezl at www.LiezlWasHere.com
(Used with Permission.)

Once a month at Largo in Los Angeles and sometimes at the Upright Citizens Brigade - LA, comedian Doug Benson hosts a comedy showcase called The Benson Interruption. It's a loose and fun evening of professional funny people who test out their material in front of a live audience as Doug interrupts them with commentary and super hilarious conversation. The good news is, Doug's Interruption will be coming to Comedy Central this fall. Although the beautiful Largo has recently become it's main home, the show will most likely tape at another venue yet to be determined (or as Doug says "to be doug-termined"). This is most excellent news with more details to come.

Meanwhile, The Benson Interruption still continues at Largo. If you're in LA, go see it on Monday July 12th (tomorrow!) at 9pm. Guests are Greg Proops, Matt Braunger and Rob Huebel plus more. Give Largo at call for tickets. You lucky LA bastards.

Doug will be bringing the Interruption later this month to New York's Upright Citizens Brigade during the Del Close Marathon. If you can't make it to NYC for the event, stick with me, because I'm going to be all over that place - Doug's show included. Lots of coverage will be had on this blog.

I wrote about Doug's show from last year's pre-Del Close Marathon performance at UCB-NY last year. Check it out here.
Posted by TVBlogster at 7:12 PM