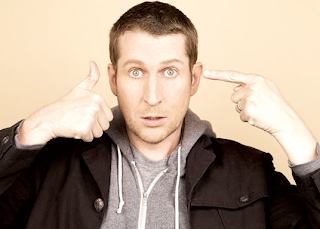 If you're familiar with the weekly podcast, or if you live in Los Angeles and are lucky to snatch a ticket to the weekly Tuesday stage show at UCB, this news will blow your socks off. It's being reported (although not officially announced yet) that Comedy Bang Bang (formerly known as Comedy Death Ray) is moving into television territory, and has been picked up on IFC.  Lead by host and Producer Scott Aukerman, the show will be, as per an IFC insider (via ADweek)... "...a highly unrealistic version of a variety show - a mixture of Pee-Wee Herman and Dick Cavett that will feature celebrity guest, comedy sketches, animation and music."  That's a pretty close description of the hilarity fans have enjoyed on CBB via Aukerman's Earwolf empire - the podcast platform where you can find comedy to delight your ears.

The house bandleader will Reggie Watts, the creator of the current CBB theme tune, and a frequent guest on the current show.


For more info on Comedy Bang Bang, a comedy nerd created a Wiki page where you can go to town on all things CBB.  http://en.wikipedia.org/wiki/Comedy_Bang_Bang