'Work It' Could Be a Sign of the Apocalypse 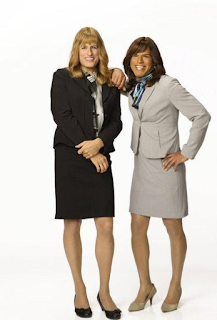 I'm not of the Doomsday sect; however, when shows like Work It get green lit and placed on a television schedule when so many other pilots more worthy are ditched, well...it makes me wonder.

This cross dress comedy, where the premise revolves around two men who are unable to get work and find they're more likely to be hired dressed as women, has insulted everyone from GLAAD to the LBGT community to straight women to the entire universe. I'm not sure if this is ABC's twisted experiment in how much an audience can take. Can it be a cynical look into how females are elbowing men out of opportunities, thus emasculating them? Okay, but that could be done with a better concept and good writing.

Or is it a jadded commentary by television showmen who are tired of how suddenly the pretty ladies, i.e. Zoey Deschannel, Whitney Cummings, Tina Fey, Amy Poehler or Chelsea Handler are dominating in prime time. (Oh, damn those broads with their successful sitcoms and their pesky periods!) Perhaps it's just an ironic look at goofy, hacky comedy seen through the snarky vision of a television executive who's got...nothing?

With reality shows that bring out the worst in people in order to get ratings, this bizarre 30 minutes of canned laughs may be a sitcom that we, a passive, celebrity worshiping society, deserve.

Work It could be gone before February Sweeps, or might continue and end up being a cultural phenomenon like Seinfeld or American Idol. In that case, we can prepare for a post apocalyptic world - where non-transgender inclined men might have to go against their nature and dress as women, and women, who are being out-ladied by men, will have to dress like girls for survival.

So, if End of Days are near, word to the guys: enjoy wearing Spanks, and make sure you get fitted for the right bra.


Update: Work It has been canceled.
Posted by TVBlogster at 9:21 PM

Email ThisBlogThis!Share to TwitterShare to FacebookShare to Pinterest
Labels: ABC, Work It