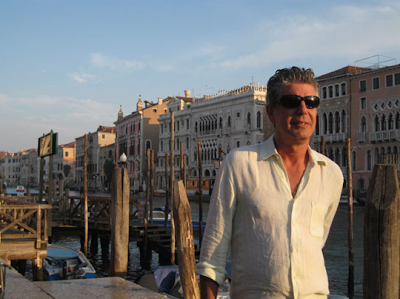 I've come a bit late to Bourdain.  His first book Kitchen Confidential came out a decade ago, and I've just finished reading it from forward to afterward, diving into each page, hungry for words, craving food and starving for stories about food. Years ago, The Travel Channel gave Anthony Bourdain a platform to display his culinary chops and wanderlust in No Reservations and The Layover, the latter which just had its season finale last week. My DVR is groaning with the volume of episodes it has collected, waiting for my return home from work, where I can delve into my own crappy Lean Cuisine while watching Tony on his journey around the world, eating local goodies from the farms, rivers and streams of far away lands and many an ocean. Breaks bread with people of all economic class, race and religion lands mesmerizing results, as he tastes his way through an itinerary of multiple countries with collected recipes of local people -  from Russia to Namibia, London to America's heartland -  who've worked the land, raised their cattle, and fattened their pigs for sustenance.

If you're familiar with Bourdain, you know he's pretty badass when it comes to his life and food. He's open about his past drug addiction. He will drink many alcoholic beverages on camera, sometimes to the point where it's evident he's shit faced to the wind. In addition, he'll spar with Food Network stars Paula Deen, Rachael Ray and Kwanza Cake Queen Sandra Lee, criticizing them for steering viewers to quick fixes on simple recipes that deaden the palette and murder the soul.

I'm slightly obsessed with this show. After a decade of seeing Bourdain on the New York Times Best Seller list, or seeing him mentioned in Zagats, it's about time I put down my lazy Lean Cuisines and start looking a food in a whole new Bourdain new way.
Posted by TVBlogster at 5:34 PM