Sweetie Dahling...The Bitches Are Back! 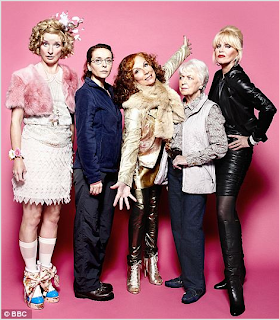 Absolutely Fabulous started out as a sketch on BBC's The French and Saunders Show. One spin off in 1992 and twenty years later, the world is celebrating one of Britain's most legendary and hilarious comedies of all time. The show is so influential, American television tried to emmulate the dynamics of the fashion crazed, hard partying, pop culture whores that are Patsy Stone and Edina Monsoon in sitcoms about women, or in a format optioned U.S. version of the series. All have failed. You cannot copy the terrific chemistry of Jennifer Saunders and Joanna Lumley. Nor can you find anyone quite like Jane Horrocks who portrays Bubble, the pixie, air-headed wonderous yet useless assistant.

Saunders put the show to bed ten years ago when the last season of 'Ab Fab' aired on BBC America in 2001. But the beauty of putting something to bed is that it will eventually wake up. Beginning this Sunday, January 7th, the twentieth anniversary of Absolutely Fabulous will kick off with a new three part series, bringing back this brood of pill and booze soaked baby boomers, along with their mums and their spawn. The New York Times mentions that the comedy continues at the same pitch, but with menopause, weight issues and other ailments of the day thrown into the miasma of nuttiness that are Patsy and Eddie lives.