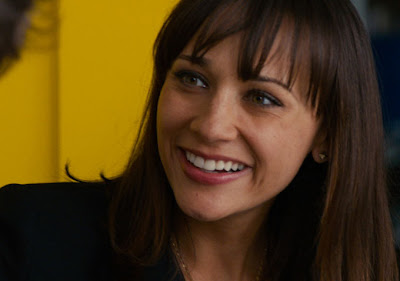 Rashida Jones and Will McCormack, writers and stars of Celeste and Jesse Forever once dated for about two weeks in the 90's, and then realized it wouldn't work out. Instead of saying goodbye, they redefined their relationship into an everlasting friendship that ultimately lead them into writing a screenplay about just that - friendship after breaking up.

With noisy Summer blockbusters busting up screens in Cineplex's everywhere, it's refreshing to note that Celeste and Jesse Forever was filmed in 23 days with a budget under $1,000,000,000, and has a bittersweet story to tell. It's a look into the lives of two soul mates who grew up together, married young, and at the age of 30, decide to split up when their professional lives flew in different directions. Their divorce is their own personal test to see how they can grow as adults. For all it's adorableness and fun, sexy moments, the film reveals heartbreak at its worst. Brace yourself if you're in the midst of a painful breakup and still picking up the pieces of your broken pumper and the empty vodka bottles strew across your floor.

Check out Rashida Jones' interview with NYTimes.com. It's a fascinating chat about how her film touches upon relationships in the post-feminist era.  I won't go into a analysis of how women today are being ignored by the men whose idea of love is to seek out, date and bang a girl who looks like Olivia Munn, so I'll end it with a beautifully perfect quote from Jones:

"We’re going through a major evolution, and men haven’t had the same evolution. At some point we’re going to have to do something to bring them along. What are they doing? Get it together! We’re going to have an entire generation of smart, stable successful women go without men, because they’re just playing video games and dating younger girls"