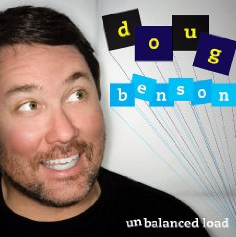 With the Del Close Marathon about to hit the ground running this weekend at Upright Citizen's Brigade in New York, I kick started my participation as a fan by attending The Benson Interruption last night. This show is an uber popular UCB ticket. Comedian Doug Benson produces an hour-plus line up of comedian friends invited on stage to work out new jokes while he sits front row center interrupting with banter. It is beyond hilarious. The additional beauty is - the line up of comedians is a surprise, and like a box of chocolates, you never know...

Benson not only hosts Interruption, but also heads up another fave UCB show Doug Loves Movies. (It's podcasted and available on iTunes). Yes, Doug does love movies. A lot. This show brings comedy friends together to discuss the latest in cinema whether awesome or crap. Sometimes the crappy-er the better.

And Doug loves weed. It's part of his life. Inspired by his love of the stuff, and his love of film, Benson created and starred in Super High Me, a take off of Morgan Spurlock's 2004 documentary Super Size Me. Instead of eating mass quantities of bad ass portions of McDonalds all day every day for a month like Spurlock, Benson smoked weed each day for thirty days. It turned out that unlike Spurlock, Doug was actually pretty healthy after one month of indica inhalation. The movie also touched upon the marijuana culture in California and some political views about its legalization.

Back to last night's Interruption. The line up was Ali Wong, Moshe Kasher and Anthony Jeselnik, all funny young comedians we'll be hearing more about in years to come.

Nick Kroll and Paul F. Tomkins showed up, and I think I lost my mind. I love them as much as you can platonically love a person.

Kroll (Caveman, Bar Mitzvah Disco, Children's Hospital) is a solid stand up and comedic actor with a line up of characters such as Fabreze Fabreze and the second half of Gil and George in the Oh Hello Show, which he co-stars alongside John Mulaney( seen in video below) on stage.

Up until recently, Paul F. Tomkins was the host of VH1's Best Week Ever, which has gone into a slumbering hiatus. Tomkins himself is uncertain of when it will return and if he'll be hosting. He was a cast member of Mr. Show, he is the dapper be-suited headliner at Largo and UCB. Back in December, I attended the annual Aimee Mann Christmas Show where he directed the comedic happenings. It was a blast to see the Benson/Tomkins give and take at last night's Interruption.

Here's Tomkins and Andy Richter in a funny Best Week Ever bit:

The photo of Doug Benson above is the cover of his new album Unbalanced Load, available for download on iTunes.
Posted by TVBlogster at 8:03 AM