30 Rock is Freaking BACK! 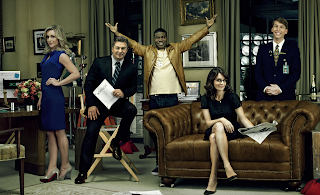 Fall season. There's a chill in the air, Halloween's Snicker bars are calling, Dylan's got a Christmas album (huh?) in the bag, and tonight is the season four premiere of Liz Lemon's adventures at 30 Rock entitled simply "Season 4". With the cast of TGS led by Tracy Jordan's brand of crazy, Jack being the awesome conservative Republican greed monster and Kenneth leading NBC pages to revolt against "the man" - its return is a sight for sore, tired, weary eyes for me and fans alike.

I'm chomping at the bit for the new season. However, the 30 Rock backlash has begun. Not to bring this joyous feeling to a complete screeching halt, but there's been some buzz that 30 Rock may have peaked a while ago.

Despite the die hards, there are some viewers who've lamented that the show hasn't been strong as of late. Furthermore, critics who've screened the first few episodes have mentioned the humor may have lagged last season, and this malaise has folded into the first few shows to be aired this month. It's evident in Alessandra Stanley's review (Biting the Hand That Feeds, NYTimes 10/15). Stanley is critical of Fey's acting and the conceit of the nerdy, food loving Liz Lemon. In her view, how do we place her as an underdog geek who loves to eat and is a social retard when Liz is slim, attractive and incredibly pushy, nay, outright bullying (as witnessed in the "Reunion" episode last year, when classmates revealed that they weren't her tormentors, but that she was the real dragon bitch who sent them all to therapy).

Sad. I don't want to be bummed out before I even view the first episode of the season. I've felt 30 Rock was strong in 2008-09. However, I will concede: the latest comments by Stanley is food for thought. No critically acclaimed show can stay perfect forever, as the last few seasons of The Office has proved.