The League on FX 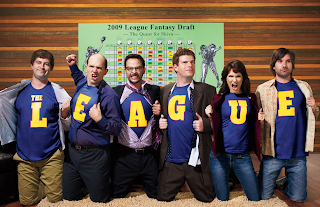 I once joined a Fantasy Baseball team. I didn't know what the hell I was doing, lost big time, and never joined again. But knowing plenty of Football Fantasy League "widows" out there, I can attest to visiting many a home where husband will be pacing the hallways with a bluetooth, talking out rosters while two TVs are going at the same time. It's like they're brokering on the floor of the Stock Exchange. This is serious business. It's also a little scary.

FX has captured this insanity in the new series The League which beings tonight at 10:30pm and will continue to air on Thursdays at that time. It's produced by Jeff Schaffer (Seinfeld and Curb Your Enthusiam) and Jackie Marcus Schaffer (Disturbia). It stars two of my favorite comedians Paul Scheer and Nick Kroll. Also starring is Jon Lajoie, Stephen Rannazzisi and Mark Duplass.

NYTimes.com: Playing Fantasy Football and Wallowing in Real-Life Raunch Off the Imaginary Field
Posted by TVBlogster at 6:41 AM

Email ThisBlogThis!Share to TwitterShare to FacebookShare to Pinterest
Labels: The League