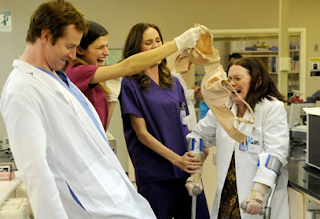 Ok, this lame day has just become a lot less lame. Word has arrived that the super funny online comedy series Children's Hospital has just been picked up by Cartoon Network's room mate channel Adult Swim, promising a season two in store and a solid run on the bigger screen.

Co-created by Rob Corddry (with David Wain as Co-Producer), Hospital is a satirical mash up of all the stupid antics and dramatics of popular hospitals shows like Grey's Anatomy, Private Practice and ER. I've loved this series since it first started streaming on www.thewb.com. I also pledged my love for it earlier this year. It has since garnered Webby and Streamy nominations. The show has also developed a pretty deep fan following.

I salute Adult Swim. It's the channel that brought us Robot Chicken, The PJ's (formerly on Fox) and The Mighty Boosh (to name a few), all edgy shows that don't fit into the frame work of other channels because they have comedy guts.

So, good news for comedy fans like me who love Children's Hospital and are having a crap balls day at the office!

Source: Broadcasting & Cable
Posted by TVBlogster at 9:07 AM