The Office: The Promotion 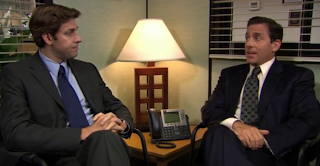 I think I need to take back all my hopes and dreams for Jim Halpert. I thought he was a relatively smart man, a decent salesman (albeit a reluctant one), and someone who would be able to go beyond Michael's silly ways in handling an office of whiny weirdos. But I was wrong. Ever since season four, the powers that be at The Office have been trying to prove how clueless Halpert can be when handling managerial situations. Now that he's co-manager with Michael, whatever the hell that is, his brain has obviously drained out of his head. He's caught Michael Scott disease, where all common sense has gone out the window.

So the Scranton branch's funds for annual salary increases are paltry. How does one decide who is going to get a raise? Oh, here's how. Let's get photos of all the employees, lay them out on the conference room table, and place a number of beans on each one according to their merit. Ok. That's how we do it in fantasy land. Here's how it's done in the real world: Performance Reviews. Remember those? The Office even had an entire episode about this process back in season two. That's right - the season where everything was more realistic and all comedy grew organically from regular, everyday circumstance. In my experience, Performance Reviews are an annoying yet necessary evil created to gauge salary increases according to an individual's performance on the job. Hmmm...so what does Dunder Mifflin do? The CFO makes a random call, tells the mighty Scranton duo to only give raises to some. That's like giving dynamite to an idiot with a torch. Or two idiots with torches. Jim appears capable, until he announces only the sales staff (people who already work on commission) are getting the bump. Dumb. Real dumb, Halpert. You look like a tool, and it gives Dwight more fodder for his anger and jealousy, stimulating more fantastical super hero day dreams we viewers now have to endure.

Pam is now going around asking for money in lieu of Crate and Barrel goodies for their wedding. Oh boy. I understand the sentiment, but seriously - if the couple is so strapped for cash, why are they having a destination wedding? Niagara Falls isn't exactly Maui, but hell, it's still hotel fees and travel. Why not just have a wedding in your backyard?

Ok. I bitch and moan. It's not easy writing twenty plus episodes a season. Yet, it appears that writers of The Office might have lost track with the realities of the real working world. Yes, it's tough out there, and yes, all companies are struggling, but to conduct business in this type of environment spells certain doom for Dunder Mifflin. Perhaps this is intentional. After all, this show will have to end sometime. What better way to plant the seeds of destruction than now?
Posted by TVBlogster at 8:19 AM