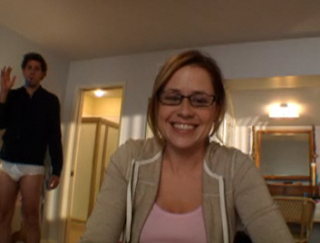 The Jim and Pam wedding episode, otherwise known as "Niagara" aired last night to the anticipation of Jam fans everywhere. (Jam. I hate that composite nickname more than I hate the word "squee".) It was a laugh riot for most viewers who did some online post mortums. Andy's pulled scrotum led to hilarity as Pam was forced eight hours before wedding ceremony tee off time to take his balls to the ER. The on going joke about Kevin's stinky feet spawned a bit where the hotel manager burned his shoes, left in the hallway for polishing, into oblivion because the health authorities were two minutes away from being dispatched. This led to ol' Kevin slumming the reception with feet in Kleenex boxes. (Oh, and a wig - to bring in da ladies). Then there was Dwight, who for some reason unknown to me, attracts hot women like flies, only to unceremoniously dump them and then accidentally kick them in the face. Wasn't he a virgin about three seasons ago? I guess Angela unleashed the hottie in him. Finally, we had the always petulant and childish Michael, who you knew was going to bag Pam's Mom about ten seconds after he met her.

This episode had all the romance and goofy humor fans of the show expect. Jim and Pam stealing away to get married on the Maid of the Mist was sweet, and scored amongst the famous viral YouTube inspired walk down the aisle. It was sort of any easy way to create something adorable for this episode. In fact, people were predicting the writers would put this stunt in there. Unforch for me, being the bummer I am, I thought the original video was cute for about two minutes before I found it annoying. The newly minted Halperts were down with it, only to humor everyone who was trying to humor them. But if anyone tries this at my wedding (if I ever have one), I will commit mass bridal murder.

To be honest, I didn't love this episode, but it catered well to the mainstream. It served its network sitcom purpose and fulfilled many an Office fan's love of romance and laughs. The Office has changed to fit with the need for ratings. It's not the smart comedy that hooked me back in the Ricky Gervais days and the US Office of seasons one through three. Back then, story lines reflected real life, jokes were spawned organically, humanity was seen in difficult to love characters, the everyday drudgery of the office drone was palpable, and the everyman found a way to survive. I can't blame the show for changing. The ratings last night prove it alone - this kind of show sells. (Nielsen overnights: 9.10 million viewers with a 4.5 share,coming in second to ABC's Grey's Anatomy.)

Nevertheless, it's nice to see Jim and Pam married. And it was hilarious to see Andy clunk down the aisle during the dance up with a bruised crotch and walker.
Posted by TVBlogster at 10:46 AM