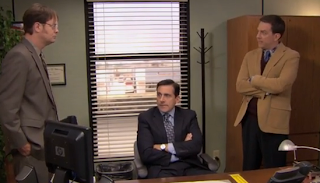 I'll preface by saying that I usually write about why I like or hate an episode of a particular show, but when it comes to The Office, I've lost all energy. I'll simply say this:

I thought "The Surplus" (season 5) was the worst episode ever, but I didn't realize the writers had more crap available in their big-o-bag of poop to dole out.

The only things that made me laugh during "Mafia" was Toby leaving the meeting in the cold open and Kevin admitting he went into Jim's office to fart. Other than that - this episode was just horrible. Really? Everybody is so dumb at Dunder Mifflin that anyone with an Italian name and thick New Jersey accent is in the mob? I've got load of Italian American friends who would beg to differ. Michael thinks he's beaten the mob? What is this, fantasy camp? The only person I liked was the insurance agent everyone feared.

We lost The Office to hell's sitcom dungeon where it rests next to the carcasses of Oliver from The Brady Bunch and Fonzie's shark.

You know why this bothers me? Because after the first three seasons of great writing and solid story arcs, long time viewers expect more from this show. It's now insulting to those who've stuck with it.
Posted by TVBlogster at 7:33 PM