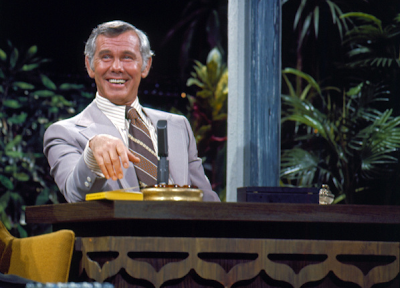 A few nights ago, PBS American Masters premiered an in depth profile on television's most revered and beloved personality of the 20th Century, Johnny Carson.

Johnny Carson: King of Late Night was fraught with challenges while in the making. Filmmaker Peter Jones was determined to produce an in depth biographic film on Carson, and sent the former late night host a letter every year for 15 years with new angles on how he would document his unprecedented reign as King of Late Night. They went unanswered for years until 2003 when Carson finally called him and said, "You write a fine letter, but I'm not doing anything because I don't give a shit."

Although other bios had been written on Carson, his life was a closed book. However, five years after Johnny's death, his family decided it was time to open up the vaults and allow the public to delve into his personal and professional life so his legacy would not be forgotten.  Thanks to this new wealth of information, Jones received the okay to proceed with the film, and set about in creating a profile on Carson as a beloved, yet complicated man whose solitary life was a stark contrast from the ebullient entertainer on camera.


The two hour documentary is a fascinating look at the son who never had his mother's approval, at the husband whose wives could no longer handle his cheating and drunken bad behavior, at the host who was easily bruised by the betrayal of Joan Rivers, at the friend whose relationship with sidekick Ed McMahon was complicated, and at the father - who remained distant from his boys, but was forever damaged by the death of his middle son Richard in 1991.

Interviews with Jimmy Fallon, Steve Martin, Doc Severenson, Ray Ramono and many, many more who've been touched and influenced by Carson's magic are present. Drew Carey provides a very moving interview, tearfully describing how his first appearance on The Tonight Show changed his life.  David Letterman's interview, to me, is the most important.  Carson was charmed by Dave's mid-western humor and snarky delivery, and probably recognized the same naughty spark, the similar mid-western calm, the smooth timing and intelligence in Dave that he saw in himself. Nevertheless, Carson took Letterman under his wing. Their mutual respect and friendship lasted years until Johnny's death in 2004.

After a living an incredible life in the limelight, the only thing Johnny wanted to be was alone. But he still had the itch. During his retirement, he'd fax monologue jokes to Dave, and would be over the moon when Dave would use them. The King of Late Night had come full circle, a legend with a classic legacy, living life happily in obscurity while getting a kick out of Dave telling his jokes. It doesn't get better than that.

Here's and interesting tidbit:  David Letterman on The Tonight Show after it was announced that Jay Leno was Johnny's successor.