Parks and Recreation: The Votes Are In? 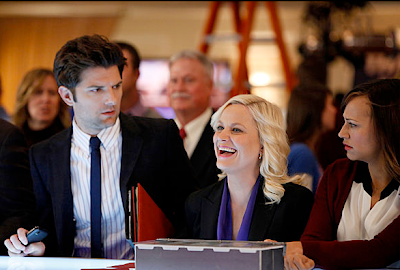 In last night's season finale of Parks and Recreation, Leslie Knope won the vote for City Council over daddy's boy, Bobby Newport. In a lovely turn of events for our hard working heroine, Leslie almost faced defeat until a recount confirmed she was the winner. The episode a rubber band of emotion, snapping back and forth as Knope's political fate hung in the balance, and her love life threatened when Ben was offered a sweet deal to work on a campaign in Washington DC.

In the study of dramas and comedies,  there is a mythological structure of storytelling, the hero (or in the this case, heroine) must get through the ring of fire to test his/her mettle. With Leslie, a Pawnee born and bred woman of integrity,  and stoic lover of civic duty, in seasons past we've seen her deal with irate parents,  falling into the hands of "gotcha journalism" and rectifying minor scandals that rocked her campaign. But her faith and integrity prevailed every step of the way with humor, grace and a crack team of supportive friends.  And of course - Ben.

Yet, the final test after coming through the ring of fire is her love life. With Ben suddenly offered a job of a lifetime in Washington DC, Leslie was initially unable to let him go. When the dust settled and victory was hers, she relented and realized he had stopped everything for her, now it was her turn to return the favor. As he embarks on six months in DC hobnobbing with the big guns of politics,  Leslie's faith and patience will be further tested with the end result, hopefully, being a lovely reward of marriage and kids and possibly the Mayor's seat.

It feels like Pam Beesly going to New York while Jim stayed in Scranton all over again. Perhaps it's a Greg Daniels/Michael Schur device to inflict turbulence into what should be smooth sailing, especially after Leslie went through a major test. Yet, as in the Beesly/Halpert case, patience was indeed a virtue, and the reward satisfying.

As we leave the fictional Pawnee and its pretend residents who represent who we are in our own communities around the country, the question still hangs in the air: Will NBC renew Parks and Recreation for a season five? The answer my friend will be blowing at the Upfronts next week in New York.

It is my feeling that we'll be seeing more of Leslie, Ben and their wonderful friends; however, with NBC cutting back on episodes for returning shows, there's a chance we'll only see about 13 episodes of their story.

Update: Parks and Recreation was picked up for 22 episodes for season 5!  Source: DeadlineHollywoodDaily.

Email ThisBlogThis!Share to TwitterShare to FacebookShare to Pinterest
Labels: Parks and Recreation, The Office