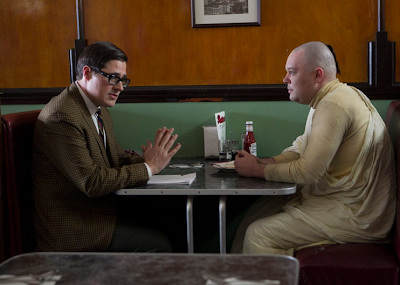 In last night's Mad Men, we were reintroduced to a lost, old friend. Paul Kinsey was a former member of the boys club of Sterling Cooper's hey day.  A struggling writer, eager to be the next Hemingway, Kinsey often found disillusionment when others who worked less hard excelled beyond him. When Don, Roger, Bert and Lane held a mutiny by unhinging themselves from the old agency to build their own brand new one, Paul wasn't even asked to join. Instead, he was left in the dust with the other drones Erickson would devour. As seasons marched on, the question hung in the air: Whatever happened to Kinsey? Did he fade off into the dust bin of the supply closet of life? While he was there, did he find Sal, hiding from his true self?

Then came last night. Harry answered a call to meet Paul at a gathering of the Hare Krishnas, and much to his and our surprise, Paul Kinsey appeared, head shaven and chanting his little heart out, while pledging his love for a Krishna patron known as Lakshmi. We thought he'd given it all up for chanting the Hare Krishna mantra all day, until he showed Harry his Star Trek spec script.

Poor Paul, even when he thinks he's found himself, he's still forever lost and yearning for someone to acknowledge his talents. But Lakshmi, a leader in Krishna consciousness,  a controlling fuck up who wanted to keep Paul in the Krishna group for her own means, had her talons lodged in his back. Her desire to control Paul was cloaked in a spiritual identity that must have been false. How can one be a devotee of pure God consciousness and want to control someone for their own gain?  George Harrison, a famous follower of the Krishna movement even called out this universal behavior in mankind in his song Beware of Darkness : "Watch out now. Take care, beware of greedy leaders. They take you where you should not go."

And Harry knew this. After his sexual encounter with the bargaining Lakshmi, he knew she was a fake.  Harry understood this female she-devil would ruin his lost friend forever. $500 and a ticket to Los Angeles while feeding Paul a big fat lie was better than watching his fading friend leave the secular world for Lakshmi's fake spirituality.  Now I wonder, how did Paul make it in the 70's? Did he continue, lost in the world, like some of my older brother's friends who hitched rides into the sunset? 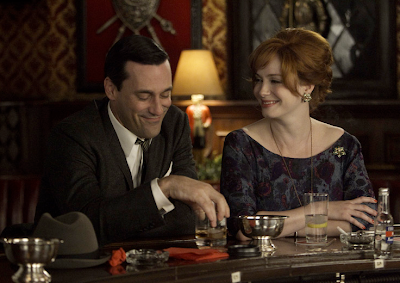 This is the aspect of last night's episode that grabbed me. Yes, the moments between Don and Joan were incredible, showing how much they are alike spiritually, and how much they respect each other without having to grab a room and do the deed.  It was also maddening to find Lane Pryce struggle to pay the UK taxman by committing fraud. What repercussions will Sterling, Cooper, Draper, Pryce face as a result of this?

But what grabbed me the most was seeing our lost friend Paul find the road to redemption through the hands of Harry, rather than by a false follower leading him to where he should not go.