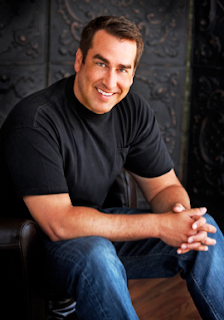 When I was studying and struggling through second level Improv at the Upright Citizens Brigade in New York a few years ago, I stumbled upon an article about Rob Riggle and his time studying at the same theater. It turns out that this hilarious, talented man, a career Marine who served in Afghanistan and Africa, and who probably saw things that would make a strong man poop his shorts, had trouble in Improv level 201 like I did. In fact, he had to take it over again. Not only did that encourage me, it calmed me down. I passed, and I quietly thanked Mr. Riggle for the courage (in my own head, of course). No, it wasn't like flying a plane over Iraq, but it was a personal battle - a battle involving a lack of confidence and an abundance of shyness - in which I overcame to pass on to level 301.

When Rob emerged into our vision as a cast member on SNL and The Daily Show, he was already on his way to tremendous Hollywood projects. He has been in a truck load of comedies, Talladega Nights, The Other Guys,  Childrens Hospital NTSF: SD:SUV, and Human Giant. He had a development deal at CBS that sort of faded away;  yet, he guest starred in Gary Unmarried and practically stole the show.

A recent development with Riggle and  HBO has bubbled into something exciting, and I believe we are all going to be lucky for it. Rob, in conjunction with comedy partners, Will Farrell, Mark Wahlberg and Adam McKay are signed on to develop a new single camera comedy, yet to be titled, starring Riggle. The series will revolve around the world of 1980's Wall Street, where Riggle's character will be a hard living trader who lives a selfish and dark life.  This is going to be a fascinating vehicle for Rob, and I cannot wait to see it on screen.

He's a universal shout of to Rob Riggle. Congratulations on what looks to be a potential success. And thanks for the courage.

More information on Deadline.
Posted by TVBlogster at 1:58 PM