Reggie Watts in the Park 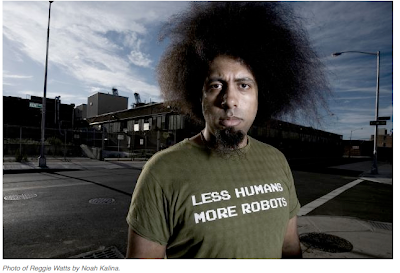 Reggie Watts is the king of electronic layering, the master of improvisational music, and the genius behind the theme music of the podcast Comedy Bang Bang. He went on tour with Conan in 2010 as his opening act and mesmerized the audience with off the wall electronica and hilarious musings. Reggie will soon to be seen as the strange and hilarious musical sidekick to host/creator Scott Auckerman in the television version of CBB on IFC, due to premiere June 8th.

Reggie is going to take over Central Park in NYC tomorrow night in Reggie Watts: A Live At Central Park.  It will air on Comedy Central at 1am ET/PT.  His beat box and looping machine will be on hand to help him create a cacophony of gorgeous funk, sweet soul and funny lyrics that contemplate women, cell phone companies, and sex, while weaving his weirdness into every crevice in between.

Also, check out Reggie in person! He's currently on tour! Follow through this link for details.

Here's a favorite Watts moment: A tribute to ladies and their big ass purses.