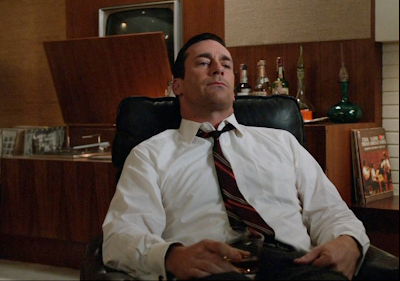 "Dying...Is an art, like everything else. I do it exceptionally well. " Sylvia Plath

Don Pushes an elevator button. The bell rings. He goes to the sliding doors to step inside, but the car is not there. Instead, he sees the deep, steep elevator shaft of the Time Life Building as the cables rattle down into the abyss. Could this be Don's downfall? A foreshadowing of a possible suicide? The tumbling silouette of Draper falling, falling, falling in the now iconic show opening? Don was letting go of Megan, and letting her go after a dream as he looked down into the void.

And then there's Pete Campbell. He's been a little jerk with a sex drive like a rapist, and the heart of a wounded child brat all wrapped up in a grown up suit. He's trapped. Coddled in wealth, molded to be the suited, Metro North riding ad executive with a house in the suburbs - just like Don, the man he strives to be. But Pete never had dirt under his nails, never drove a car, nor did he have to stumble to an outhouse in the freezing night like Dick Whitman. Nor did he have to hustle to get a job with Roger Sterling. Nope. Pete had uncle Roger and Bertie cut him out like a cookie to be an ad man. Then he wanted to be Don Draper. But Don Draper isn't even Don Draper anymore. He's moved on from the fucking, the blonde wife, the Ossining House to a young brunette and a lush life in his apartment on 72nd and Park, trying, at the age of 40, to hang on to what is real, what is hip, what makes humanity key in.

There's Peggy. She's a trailblazer whose succeeding in becoming Draper. Tirelessly working herself into a nub to achieve her status, she has to deal with Megan throwing away the same opportunity that was so easily handed to her. Joan has it right. These are the girls who marry the wealth, who become the ex-actress and never has to work again.

Alone in his swanky upper east side apartment, Don mulls over The Beatles Revolver album. He takes it out of its prestine cover and skips to side 2 - last song, "Tomorrow Never Knows". "Lay Down all thoughts, surrender to the void." Hmmm...could we connect the elevator shaft to this?  "It is dying...it is dying."  He lays back in his designer chair, still in dress shirt and loosened tie. Weird sounds and off beat drums fill the room. Revolver, being the transitional album that was on the precipice of the Beatles breakthrough before Sgt. Pepper, the album that turned the 60's from black and white into color. Just like the Chevalier cologne ad pitch.

Don should take a word from a scene from a Hard Days Night, when George Harrison stumbled into the office of a smarmy image maker who jabbered fashion talk to the clueless quiet one. As George leaves, fashion man said to his bored assistant, "Could he be it?" Assistant, "You mean an early clue to a new direction?"

Don listens to the tape loops and the tabula and Ringo's drums. The turns it off.

How did Matthew Weiner get a master recording of The Beatles on television? NYTimes.com has the answer.

Email ThisBlogThis!Share to TwitterShare to FacebookShare to Pinterest
Labels: Mad Men, The Beatles