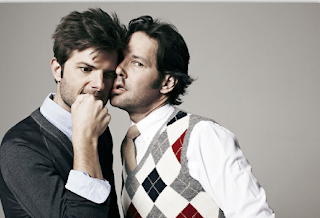 Upfront season is a mixed bag of emotions for a comedy follower such as moi. On one hand, pilots are being staffed,  and the impending Upfronts are bringing in news about sitcom pick ups, whether  returning or brand spanking new. On the other hand, it's the end of another television season.  Story lines are drawing to their final conclusions, and cliff hangers are hatched to torture you during summer barbeques as you argue with your Glee obsessed cousin about who'll develop herpes, which teenager really looks 30 years old and whether or not they'll get into the Nationals.

Tonight, Parks and Recreation will have its season finale. Leslie Knope has been campaigning for City Council of Pawnee, up against a spoiled millionaire's son played to perfection by Paul Rudd. In tonight's episode, the election comes to its conclusion, and we will find out who the victor is - Bobby Newport or Leslie. Two endings were shot - one of Leslie winning, and the other of her losing - so all bets are on. No official renewal has been made for Parks and Rec, but I'm betting we'll see its return in 2012-2013 season.

After a rocky season of hiatus and the faux pas of Dan Harmon's outing of his hatred for Chevy Chase, Community has been renewed for season four with a short order of 13 episodes. 30 Rock has also been given a pick up; however, next year will be its last, with another abbreviated run of 13 - 14 episodes.  Parenthood has also been given a nod to return, with a short season as well. 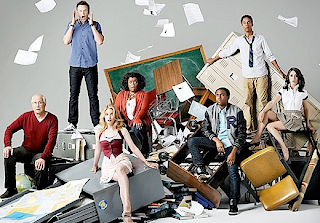 The Office continues to cough and wheeze its way  into another year, with Jenna Fischer, John Krasinski and Ed Helms being good sports and ready to sign on for another round. There has been no word on whether this old horse of a show will be taken out back and shot, but I think the humane thing to do would be to euthanize this poor animal before it really begins to suffer. It's already limping along on Thursday nights, a shadow of it's former self. Tonight is the season finale. 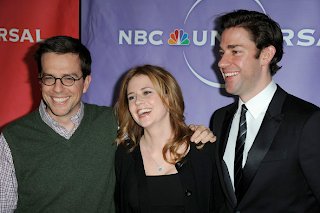 Whitney and Up All Night are balancing ever so delicately on the soapy bubble of NBC. Their fate will be announced soon.

Posted by TVBlogster at 6:29 PM

Email ThisBlogThis!Share to TwitterShare to FacebookShare to Pinterest
Labels: Community, Parks and Recreation, The Office, Whitney