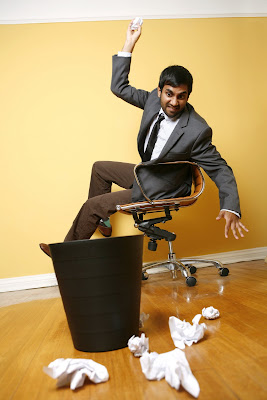 The breakout star of the summer is Aziz Ansari. How cool is that? A cameo appearance in the Judd Apatow film Funny People as stand up Raaaaaaaandy has given him a bump, spawning viral video shorts on FunnyorDie.com of the brash, "merch" flogging comedian. The character is a loud, fast talking jokester with stories of sexual encounters, macho prowess all accompanied by a DJ who punctuates his verbiage with hip hop stings. Do I sense a bit of Dane Cook-ery here? All attitude, shouting, strutting and gesticulating but when you hear what he's actually saying - there's no funny? Perhaps. Judging from interviews Aziz denies any Cook impression, but that's not to say he wasn't inspired. Ansari has already honed his mockery skills on MTV's Human Giant by co-creating a spoof of Criss Angel's silly Mind Freak antics with Paul Scheer in "The Illusionators" sketches.

His portrayal of Tom Haverford, an apathetic bureaucrat on NBC's Parks and Recreation who likes to make the moves on the ladies is pretty spot on considering I've met a few. After only six episodes, he's emerged as one of the funny highlights in an ensemble cast I hope will be allowed to flourish in the same vibe as The Office. (Poehler, much like Carell, is the star, but might be overshadowing the rest of the P&R group as Leslie Knopes, whereas Michael Scott has been the beacon to many other quirky characters who stand out equally.)

We have more Aziz to see in the upcoming year. In addition to the Raaaaaaandy love, the NBC sitcom and many of his own stand up performances (as himself), he's slated to appear in Apatow's next feature Take Him To The Greek, starring Russell Brand due out in 2010.