Rob Huebel is Sneaking Up On His Enemies 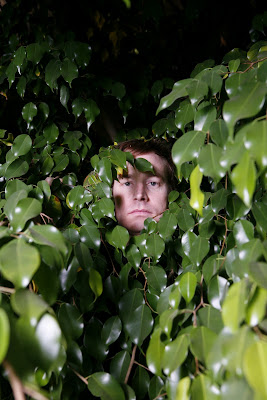 Photo by Seth Olenick
Somewhere in the wilds of Southern California - we'll call the place Los Angeles - is a man with a computer, a Blackberry and a Twitter account. He has rescued American journalists from hard labor in North Korea ("Bill Clinton can take credit for securing the release of the journalists...but just KNOW that it was really me..."), has given super hero advice to those getting laid ("If you go on a date tonight and you end up making out, stop for a second and whisper: "I'm from the future"...then keep going..."), and is in a state of constant alert for unsavory elements ready to invade his airspace ("I will sneak up on my enemies at once. They will look foolish bathed in my toilet of hate...").

It's doubtful that Rob Huebel has enemies. He's well liked. From a far, my guess is that he's somewhat like the Seth Olenick photo above - hiding in plain sight, sitting silent until the right thought comes along, or the funniest quip is ripe for telling. Accessible to fans - but as any private citizen who defies evil - up to a point.

His Twitter presence is just the tip. Huebel (as I've mentioned a few dozen times on this blog) is co-creator of MTV's Human Giant, and is currently working on a script with partners Aziz Ansari, Paul Scheer and Jason Woliner to bring the show to the big screen. He played douchebag Tevin Downey in the film I Love You Man (now out on DVD), and guest starred in Curb Your Enthusiasm, The Office, 30 Rock as well as co-starred in Rob Corddry's web series Children's Hospital. He's also recently enlived Gary Busey's big stonking teeth in Mean's Cinemash parody of the old Kevin Swayze flick Point Break.

Huebel is one of the legends of the Upright Citizens Brigade Theatre where he performs weekly at their Los Angeles location. (He was everywhere at last week's Del Close Marathon: Doug Benson Interruption, Facebook, Match Game 76, Mantziggle, Respecto Mantalban, Assscat - staple shows all UCB fans know and love.)

Yet, in between performances and moments on screen, his Twitter presence lends a connection to those who love the hilarious thoughts that waft through his mind. In the past year, as his Tweets became more hilarious and prolific, and as things got a little tough in my life, I found that a funny notion micro-blogged from Rob, and visits to his Tumblr blog, just when things started to suck, made life - bearable.

Rob will be appearing in Michael and Michael Have Issues' season finale tomorrow night on Comedy Central (10:30pm). He's also just finished filming a pilot for Fox - The Station. It's Executive Produced by Ben Stiller and directed by David Wain. Huebel plays a CIA operative/assassin. As per his Tweet the week of shooting...

"Shooting with @davidwain. Just got to assassinate someone from a moving car. Squibs, blood, guns. Someones got a hard on."

That is...when he's not following around neighbors in his Prius on "Follow Fridays".