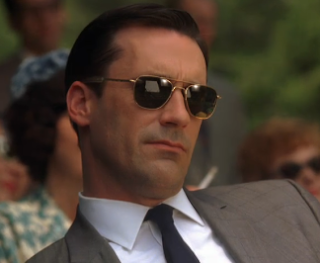 The first two episodes of season three Mad Men have been simmering slowly on the stove, like the milk Don boiled in last week's premiere. Antiquated ideals are steaming to the surface. Old elements are turning to solidified skin, soon to be skimmed away with a wooden spoon.

What struck me the most was the scene at Don's daughter's school. Field Day. Dancing around the May Pole. We see the long haired teacher in a flowing dress, barefoot as she danced with children, glorious in the sun. It was a stark contrast. The suited, bee hived, horn rimmed sun glassed parents, almost faceless, a symbol of old school sobriety and straight laced fashion, meeting the natural hair, the bare feet and peasant dresses that would blow their crew cuts away. Don caught a glimpse of it in California. His fingers brushed the cool grass, perhaps to sense how it flowed between her toes. Black and white cocktail days are turning to Kodachrome color.

Things are moving slow. JFK hasn't even been assassinated yet. Don's world doesn't know what they're in for. The milk will be simmering and boiling over soon.
Posted by TVBlogster at 8:08 AM