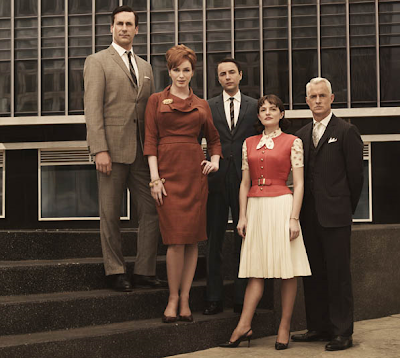 Mad Men's premiere episode entitled "Out Of Town" aired on Sunday. Two days later and two viewings later I am still flummoxed. I'm stuck on that strange flashback Don had in regards to how he came into the world and why he was named "Dick". Was the word "dick" used as an expression during the Depression? Was Don being haunted by his prostitute, feverish, dieing baby mama and his highly devout Christian faux-mom who couldn't birth any babies?

Sal. Poor Sal. I wanted him to have that moment with the bellhop because it would allow him to live out his true nature. Those damn fire drills.

Betty is still pretty and skinny and pregnant and still harbors a latent hatred toward her daughter. With one possibly on the way - there will be two daughters she'll try and screw up.

Joan is looking large this season, although the beautiful Christina Hendricks was undoubtedly padded to look like a linebacker in a bullet bra.

Don is still a cheating cad, but still dashing and sexy.

Roger still drinks and is now married to that 20-something kitten.

Sterling Cooper is officially taken over by the British with a straight laced boss (played by Jared Harris) who neglects to tell Pete and Ken they were both made Head Of Accounts so they can fight it to the death.

Peggy can get no respect from her secretary since the girl treats her like a girlfriend, and the British male secretary who wanders through the secretarial pool doesn't have to type letters because he's a guy. He apparently was hired to make the girls squeal over his sexy British accent.

Oh. A guy got fired and told everyone to fuck off.

To be honest, I wasn't wow'd by this episode. It didn't inspire any Monday morning arm chair quarterbacking from me. It didnt make me wax lyrical over each scene and flow of storyline as it did after last season's finale, when I was inspired to write about the metaphorical aspects of character circumstance. The words just flowed back then.

Maybe I was too tired from spending the best weekend of my life down below ground in a hot, sweaty, funny theater - so anything I watched on TV, or any joke I heard couldn't compare with the 50+ hours of UCB improv I laughed through.

Yet, even if it didn't knock my socks off, the episode was intriguing. There is much to look forward in episodes to come. I hope.

A Random Thought About the Sixties...

My much older half brother Joey always tries to sound like he was a cool hippy back in the sixties, when I was slithering around, unaware of my own hand much less a cultural revolution. Several years ago he mentioned that he went to Woodstock. I never believed him.

This picture in the NYTimes today has proven me wrong. Joe - I guess you were there, or mom had a twin son we don't know about.
Posted by TVBlogster at 11:43 AM