It's a "Page Off" with Scheer and McBrayer 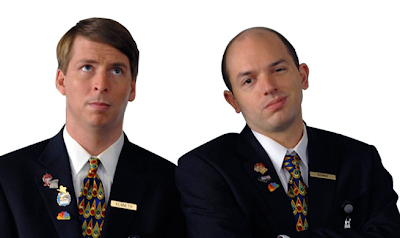 I spent a good portion of last weekend watching Jack McBrayer and Paul Scheer partnering on stage and joining other Harold teams at the Upright Citizen's Brigade Del Close Marathon. These incredibly talented artists, who played arch rival NBC Pages on 30 Rock, form a solid bond in the give and take of improvision. Not surprising since they've been doing it for years at UCB. Since some members the 30 Rock team are embedded within the UCB talent pool, the duo's chemistry was a no brainer when the powers that be added Scheer in season two (Rosemary's Baby, Cooter) as Donny Larson, the smarmy evil head of all Pages who wants to bring Kenneth down.

I was on deck to become an NBC Page job years ago after several months as a Talent Relations intern. I groveled and kissed butt over at Guest Relations for a chance to wear the blazer and herd audiences like cattle into studios. Luckily a full time employee job opened up and I by-passed the program. (I'm not sure about today, but back then Pages were not employees and had no benefits.) The arch enemy story line between Donny and Kenneth was extremely satisfying nonetheless. I knew - even then - that being a Page can sometimes be cut throat for real. If only Page-Offs were real, as they are in Tina Fey's world of 30 Rock - where one Page battles another for dominance through a game of wit and physical force.

Here's hoping Scheer (who also stars in MTV's Human Giant) will be back for more episodes soon.

On a completely different Scheer-McBrayer note: Here's your Yo Gabba Gabba "Knock Knock Joke" of the day...

Posted by TVBlogster at 7:07 AM