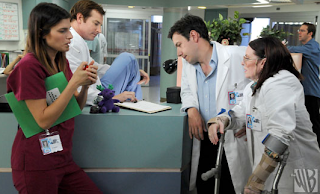 If you could take the sex antics of "Private Practice, the melodrama of "E.R.", mixed with the shark jumping of "Grey's Anatomy" (having sex with an dead lover anyone?), stir in the writing of Rob Corddry, add a cast of hellaciously funny comedians who know how to provide good comedy punch, and you have the new online mini-sitcom "Children's Hospital", exclusively created for and streaming on The WB's new media site. (http://www.thewb.com/video/507a47889e/childrens-hospital/episode-1)

Written and directed by former Daily Show correspondent Rob Corddry, who also holds co-producing credits with David Wain and Jonathan Stern, "Children's Hospital" takes place at, yes, Children's Doctor Hospital, located somewhere in a surreal comedy world known as "Brazil" because who really cares? It's not the location but the action within the walls. 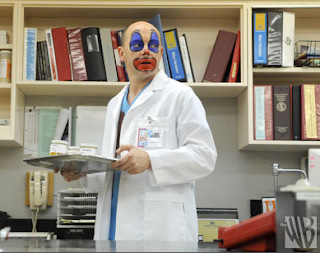 Doctors swap partners in broom closets, gratuitous lesbian interaction is teased, medics puff on Marlboro's in the nurse's station, and one of the head doctors (played by Cordrry himself) tries to out-Patch Patch Adams by walking around in clownface, defying scalpels and sutures by trying to heal with the gift of laughter. Megan Mullally does a cringe worthingly funny take on E.R's Dr. Kerry Weaver as the Chief of Surgery who does more damage with her crutches and off color comments than good. A bevvy of familiar faces play the clueless doctors of Children's Hospital. Ed Helms, Ken Marino, Rob Huebel, Nathan Corddry, Erin Hayes and Jason Sudeikis add to the parade of cameos. A personal favorite is the story of Nicky, a six year old boy brought into the facility due to his rare case of rapid growing disease, whose freakish growth into a cute young man grabs the eye of the introspective and easily romanced Dr. Cat Black who claps eyes on the man child as he joyously mentions he has gout.
The humor here is deliberately (and deliciously) broad, using ironic farce to place the biggest digs on medical dramas that take themselves too seriously, before and behind the cameras, and promoted with eye glaring drama and manipulative soundtracks pandering to the saps in all of us. "Children's Hospital" provides a hilarious take on this age old and tired format.