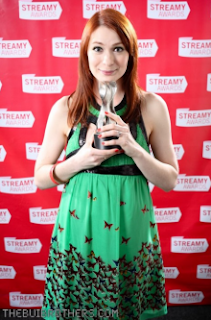 You know that an awards ceremony is going badly when audience, nominated guests and crew are tweeting as if they're being held hostage. "I'm tweeting from inside the building. So many hours. Can't remember the last time I saw daylight."

The Streamy Awards are to honor those whose online work was worthy of attention. Sadly, they may have taken a step back after last night. The show had lots of technical problems. There was bad audio (the online audience could hear host Paul Scheer when he was off stage). Problems with timing and some very blue comedy that pissed off some people online. Oh, and streakers. Hello 1970's, your naked penises are back!

One can hope that it didn't anger the sponsors of the event - Kodak and Trident - two titans that probably hoped for something better than what they saw last night.

I don't want to dwell on the negatives. They're obvious. Plenty of people are talking about the bad on Twitter #streamysfail and #streamys. Here are the positives. Scheer did a remarkable job of holding down the awkward silences caused by frozen graphics and wrong video clips. His improv survival skills kicked in, and some of the funniest jokes of the night were told by him off script. Rob Huebel's bit as the pimp guy who headed up an internet porn site was hilarious. It got the biggest laughs of the night. It was great to see Zach Galifianakis' Between Two Ferns and Ileanna Douglas' Easy to Assemble take home some prizes.

Congratulations to all the winners!

Here is a short list. All winners and nominees can be found at Mashable.com.

Nominees:
Between Two Ferns with Zach Galifianakis
Easy to Assemble
The Guild
The Legend of Neil
Wainy Days

Best Animated Web Series: How It Should Have Ended

Nominees:
Agents of Cracked
Anyone But Me
Dorm Life: Semester 2
Elevator
Noob
Star (

There's some interesting commentary online about the execution of the show. There's some positive here too. Hopefully, producers can learn from this and do a better job next year.

Email ThisBlogThis!Share to TwitterShare to FacebookShare to Pinterest
Labels: The Streamys